“These guys are total nutjobs. In the nicest possible way.” 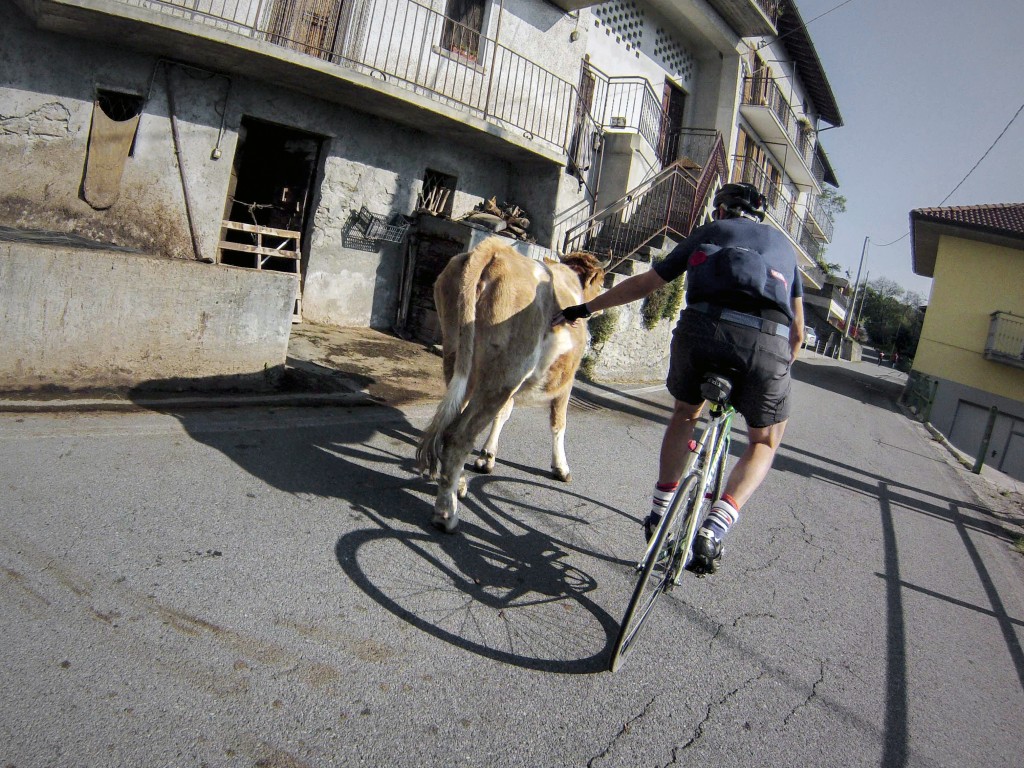 I was trailing behind three Italian strangers with whom I’d briefly interacted on Instagram, and I was wondering about their sanity. Forty five minutes into a seemingly never-ending climb my legs were beginning to grumble. Switchback followed switchback as we dragged ourselves ever higher into the mountains of Valtellina. Above us, the frosty peaks recently anointed with the first snow of the season heckled. My quads felt inadequate and I was on a road bike. The Italians were all on track bikes!

Through the wonder of social media, we’d met up with a group of local riders dubbed Cani Sciolti to check out the route of their legendary fixed gear race, Sacro Macello Di Valtellina. The race, which takes place on the 8th of November is a brutal 40 miler with around 2000m of climbing and takes in some of the areas finest roads, with some off road sections and cobblestones thrown in for good measure. 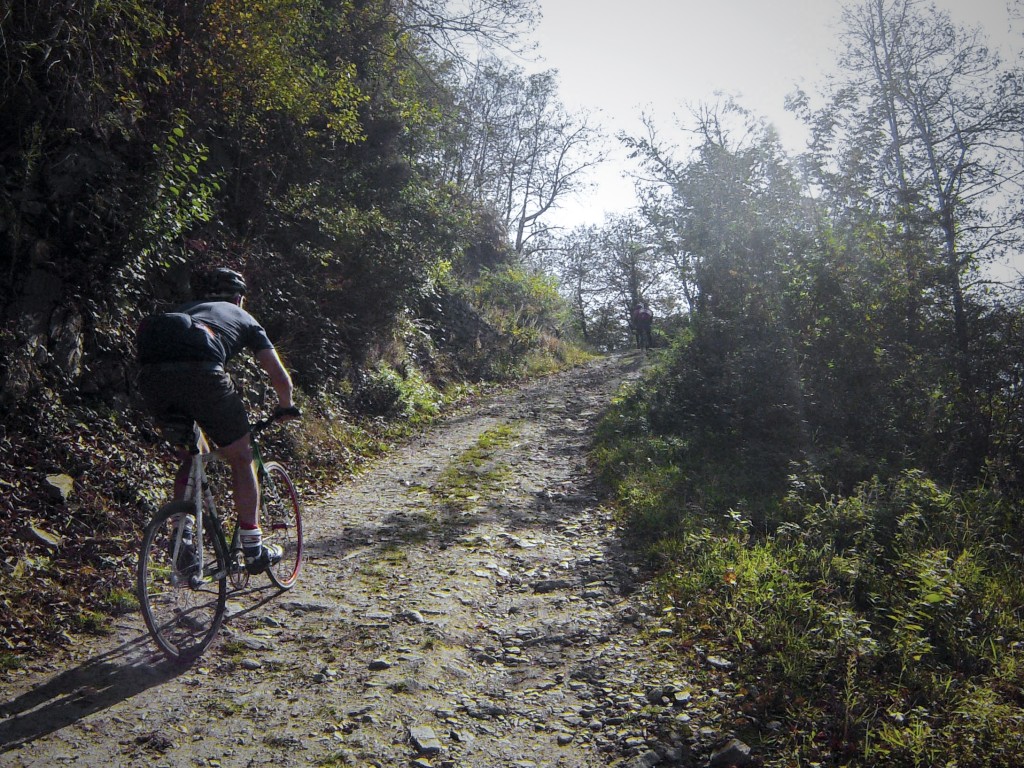 I was absolutely stunned by how strong the Italians were, ceaselessly grinding their way up challenging gradients with just one gear. The incredible views, quiet roads and chit chat as we became acquainted certainly helped, but still… it was T O U G H!

And their brawn didn’t fade when it came to bombing down the mountains – the lithe and unassuming looking Marcello turned out to be an absolute monster on descents, pedaling as fast as I was freewheeling then chucking huge skids into corners where the road dropped away into infinity. The guy’s got guts and talent by the bucketload. 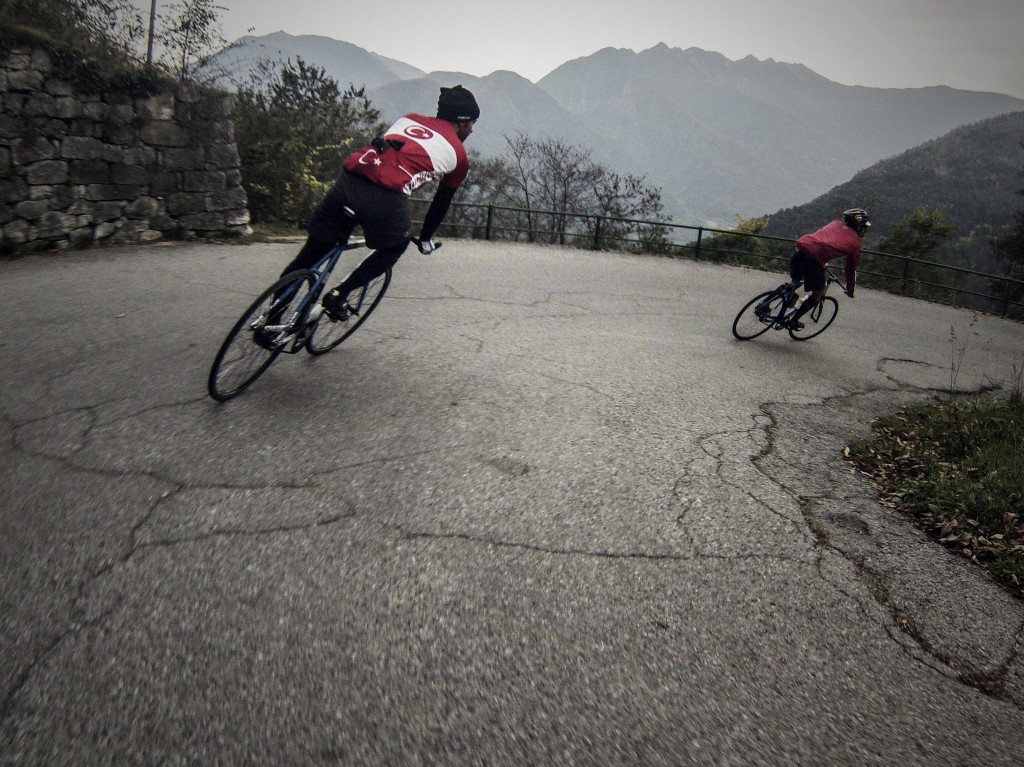 Feeling somewhat brutalised by all the climbing – I probably wasn’t helped by the fact Dave and I had ridden 30km to the start of the ride, and done so at pace – we stopped for lunch in a tiny village at the bottom of Val Masino. Italians don’t do lunch by halves, so we began with huge plates of antipasti and a litre of red wine, followed that with pasta and another litre of wine, and then the grappa came out. I was told Grappa helps with climbing, and who am I to argue. 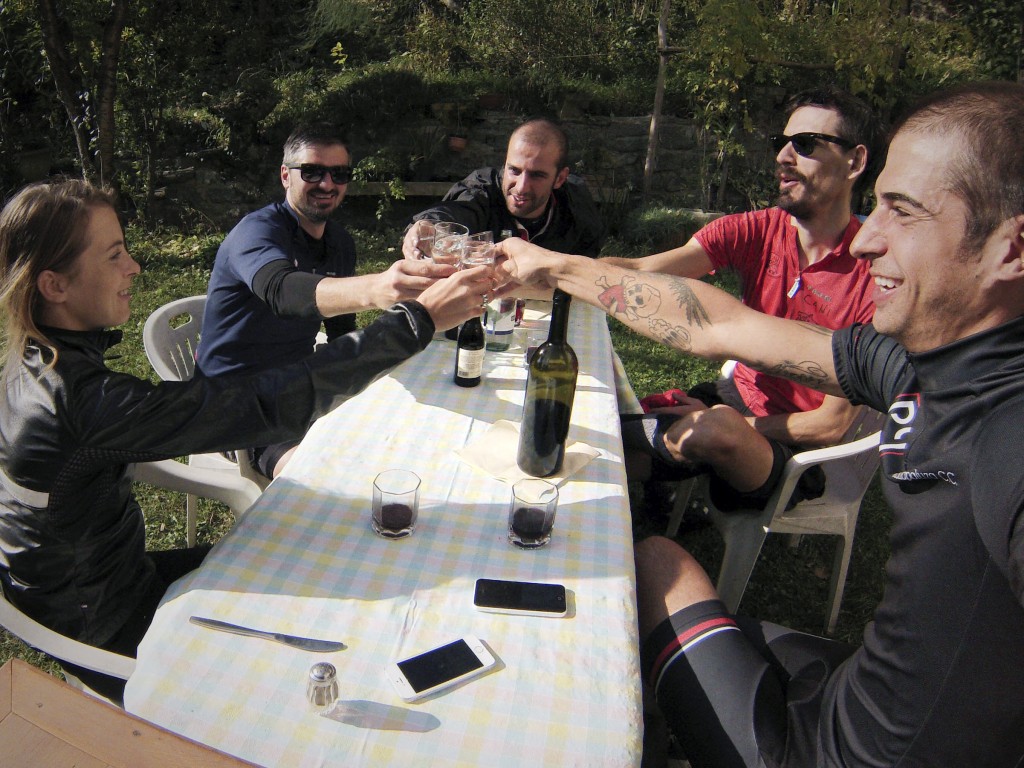 After lunch we rode up Val Masino, which is quite possibly one of the nicest places I’ve ever been, and not just because I’d had a few drinks! I know I frequently say somewhere is the nicest place ever, so perhaps it’s better to come up with a more descriptive analysis, but anyway, it’s home to the biggest freestanding rock in Europe which is entirely covered in bolts for climbing – I’ve never seen so many routes just waiting to be explored and was practically salivating at the prospect. It felt great to be deep in the magic of nature but surrounded by people so excited by all it has to offer. Even the little goats pottering about seemed happy to be there. But that was probably because they were sharing people’s sandwiches. I can’t wait to go back with a rope! 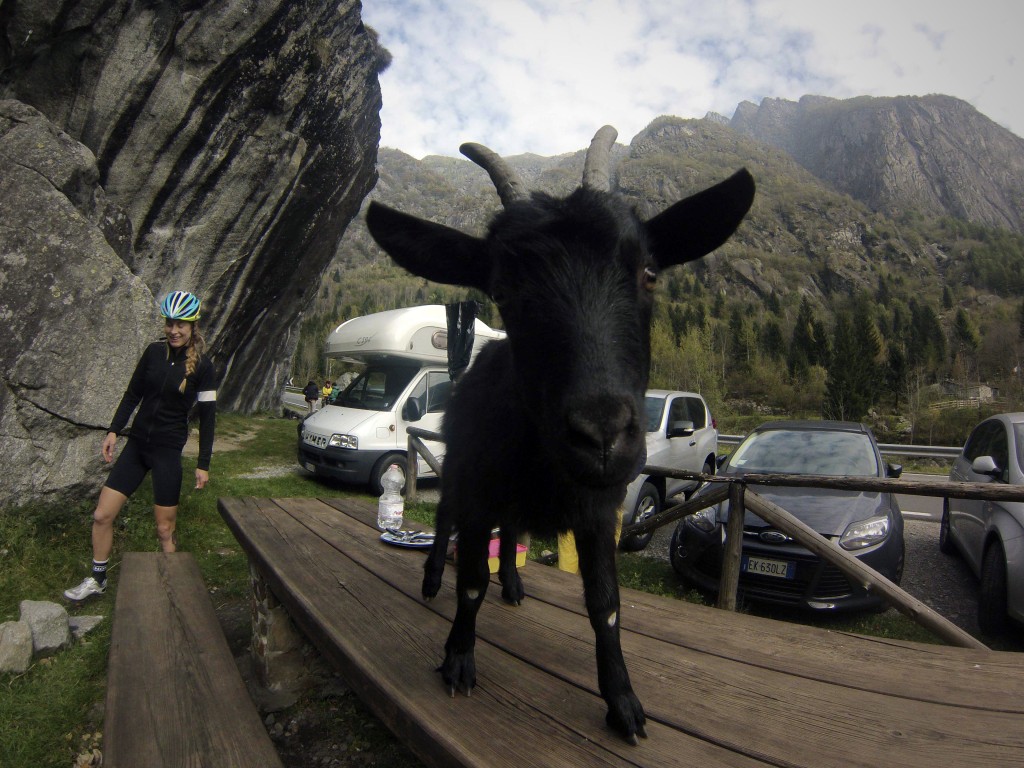 After a ride to the end of the valley we turned back towards Morbegno and began a really fun descent that seemed endless… until I missed the turning for the next section of the Sacro Macello. After climbing up a hill so long and steep that I nearly wept, we popped back out at the same place on the road out of Val Masino – turns out that extra bit of torture was just for fun/pain/love/hate. It was bloody horrible but kind of awesome too…I was alternately cursing and whooping with joy. 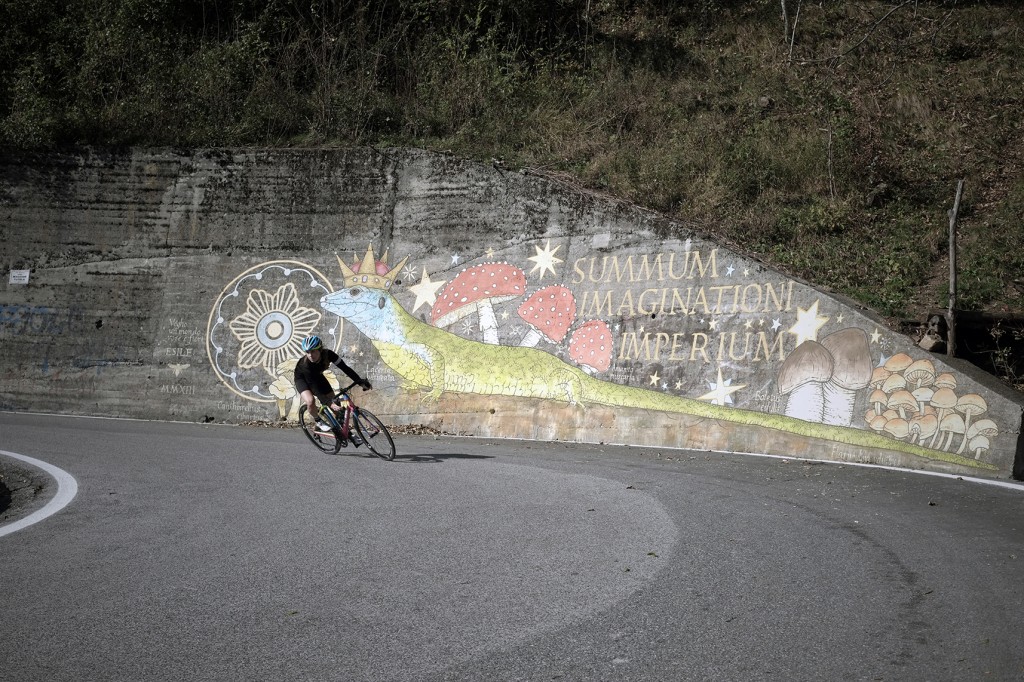 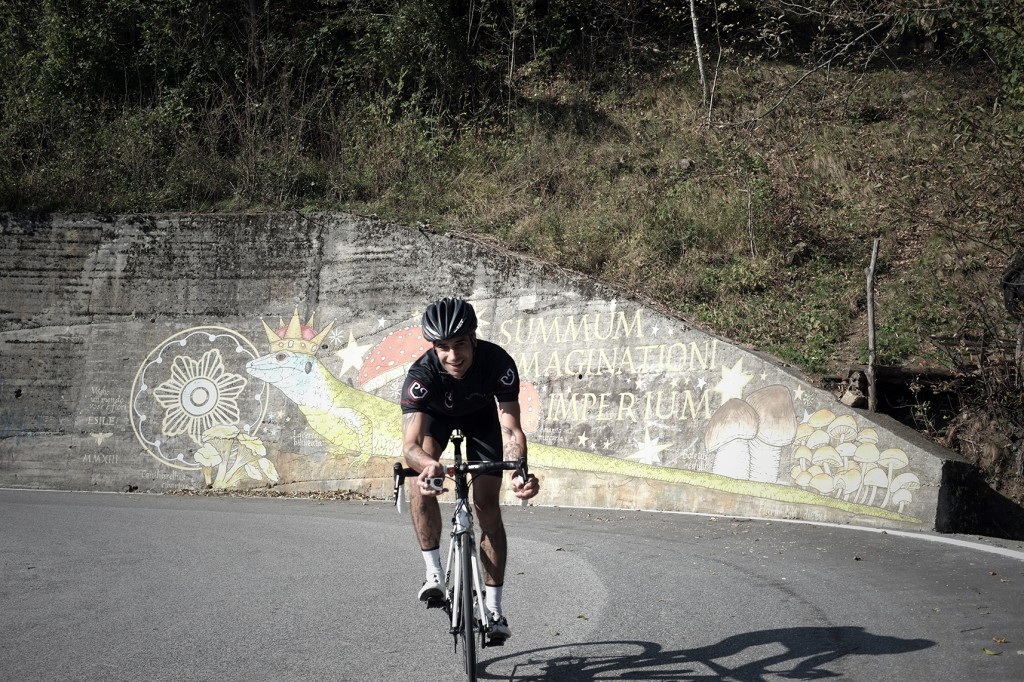 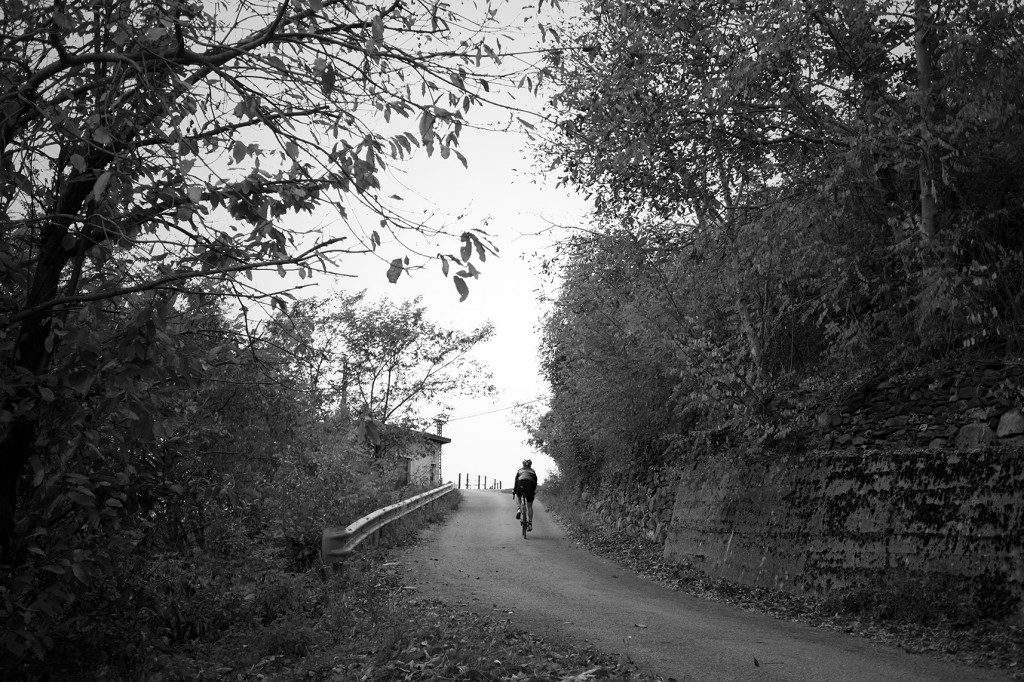 Climbing over we bombed back down to the valley and along to Morbegno where we said goodbye to our new friends – what a cool bunch they are and wow, so seriously strong and fast. Unfortunately they can’t enter the race because they’re organising it, which is a shame as I’d love to film and photograph them racing so I could share that with you all – Marcello is a really impressive rider and with scenery like we have here I’m sure we could create something really nice. Maybe you fancy entering yourself? 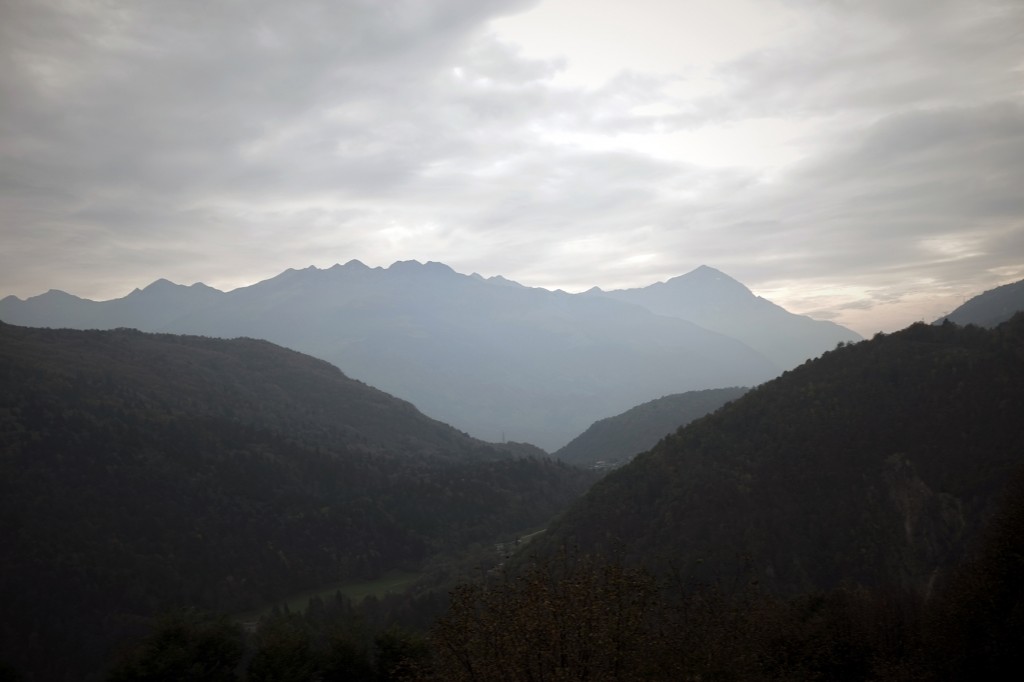 So as our pals headed back to their homes in Morbegno, Dave and I trundled home again – another 30km and some more switchbacks. I pretty much ordered a more suitable cassette the minute I got in, so maybe, just maybe my next ride will be easier. I doubt it though, what’s the fun in that?

Re-posted from here and here