It’s truly bizarre, but every time Mr. John Watson asks me to post some stuff on his website it is always something that has to do with failure.

Failing is part of our everyday experience (I think I fail every single day, in one way or another) but it’s a term that’s not so well renowned in the cycling blogsphere (and beyond…)

Nevertheless we, as Cani Sciolti Valtellina, have a special attractive relationship with the unknown, which always drives us over and above the boundaries of the “well planned / all into account” philosophy to dive into the aleatory world… 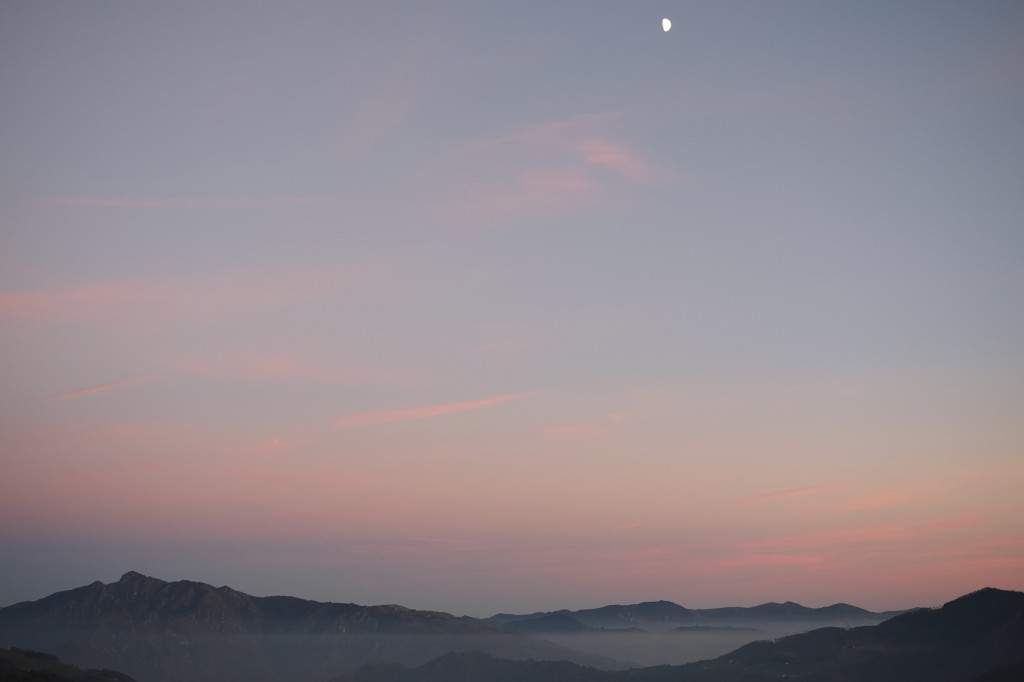 There are some things that I’m certain of. One of them is to always participate to Cani Sciolti Valtellina events. The biggest drawback is some 600+ km between Rome (the city where I live) and the “Wrong Valley”. But as soon I’ve heard talking about the Randonneè delle Orobie it was no-brainer – I must be there!

After a long trip and 2 trains taken I’ve reached the starting place some 6 hours before the scheduled start. In this time we have squeezed some pizza & beer, parking bikes in empty water tanks, pointless wandering inside Clava’s house and finally a few hours of sleep. Then, at 5a.m. the alarm rings. We prepare ourselves and at 05:40 we hit the road. We’re in 7: locals Cello & Clava (total nutjobs), Alberto (fresh from Otztaler), Ilaria (our tough lady), and non-Valtellina guys Pigo (cross racer became randonneur), Stefano (fast fellow from Milan) and myself. 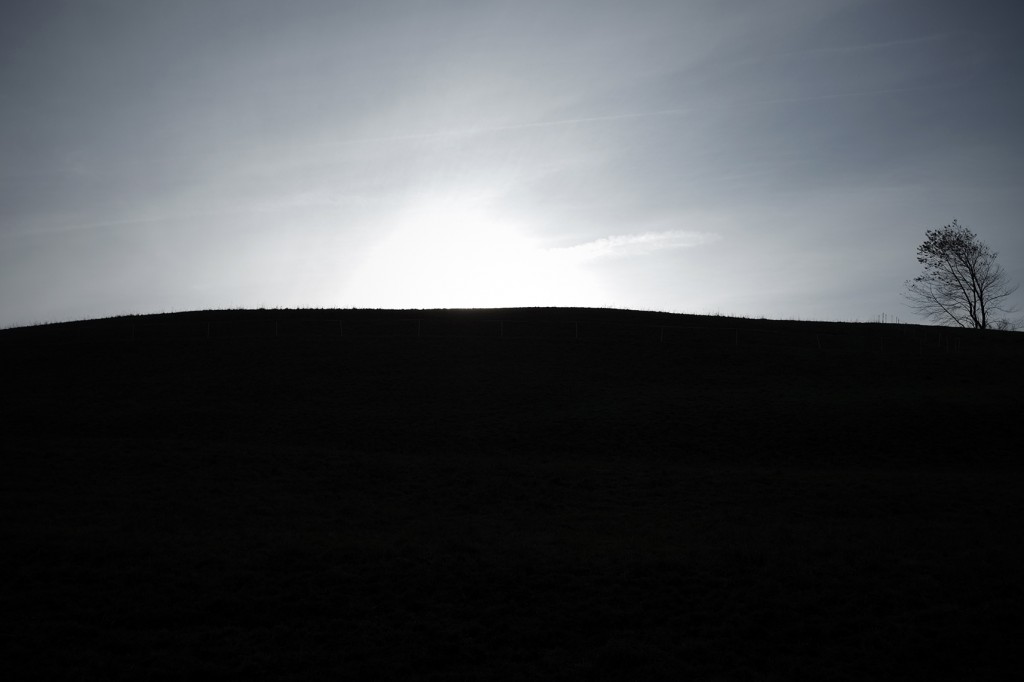 It’s still dark and we start cycling towards the Como lake. We ride the first 20 km until Bellano, the only simple flat section. In Bellano we hit the only open cafe to get some breakfast: hot tea is the king (it will be for the whole day). There we also observe some local men drinking white wine, and it’s not 7a.m. yet! Cello says: ”I don’t know who is more fucked up – us or them…”. This phrase goes straight into our folklore. 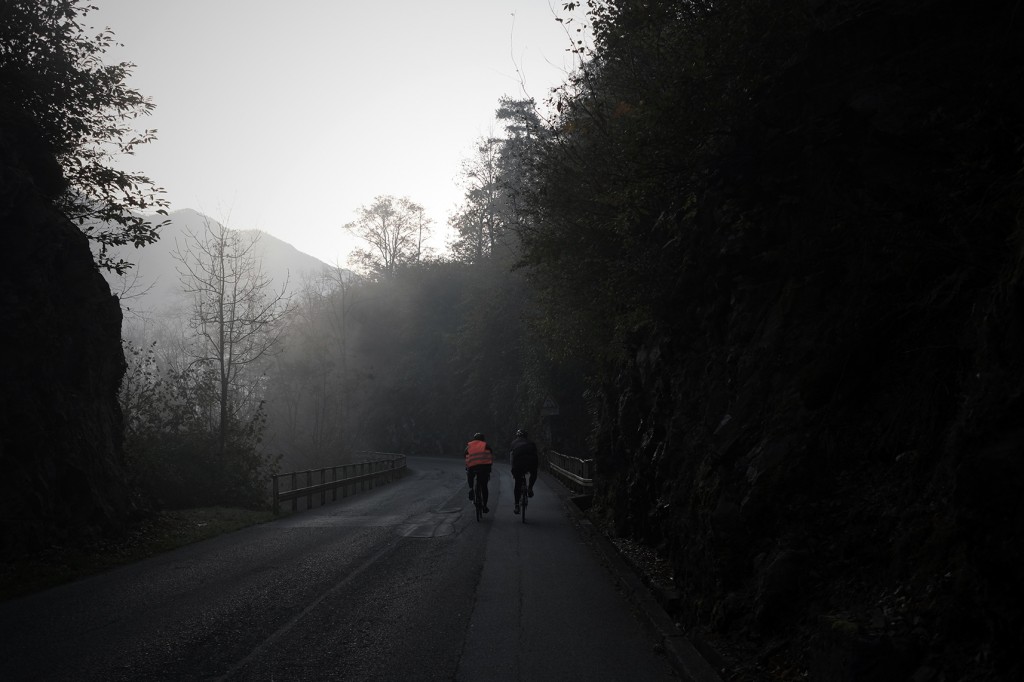 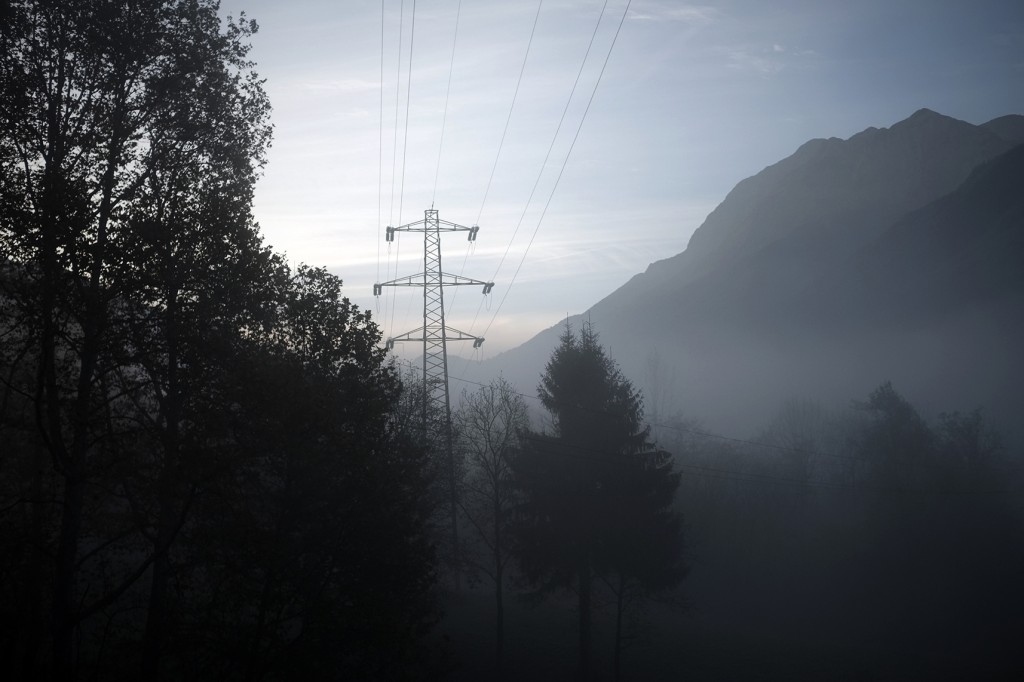 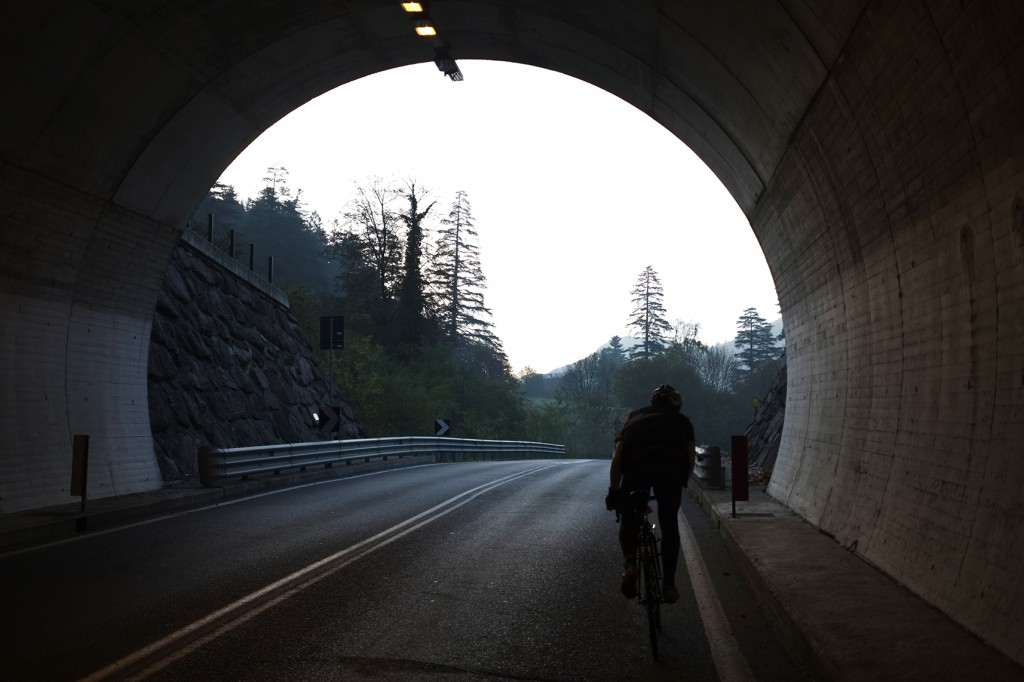 The breakfast is done and we hit the first climb, 5km with 6% average. At the end we’re about 500 m above the sea level and we start to feel the mountains. Here I need to start memorizing all the new geographical names – now we ride in Valsassina. The road is so and so, getting quite narrow sometimes. But the day is growing nice and sunny, despite our gloomy expectations. Soon we hit the second climb, harder than the previous. The group splits and we all do our personal struggle. Strangely I manage to be in front of the group. And it’s now that we are hit by a big surprise: the king of pretactics, MPagha appears at unbelievable speed on his Pelizzoli carbon road bike! He couldn’t make to be at the starting point with us, so he pedaled from his home in Bergamo to reach us. 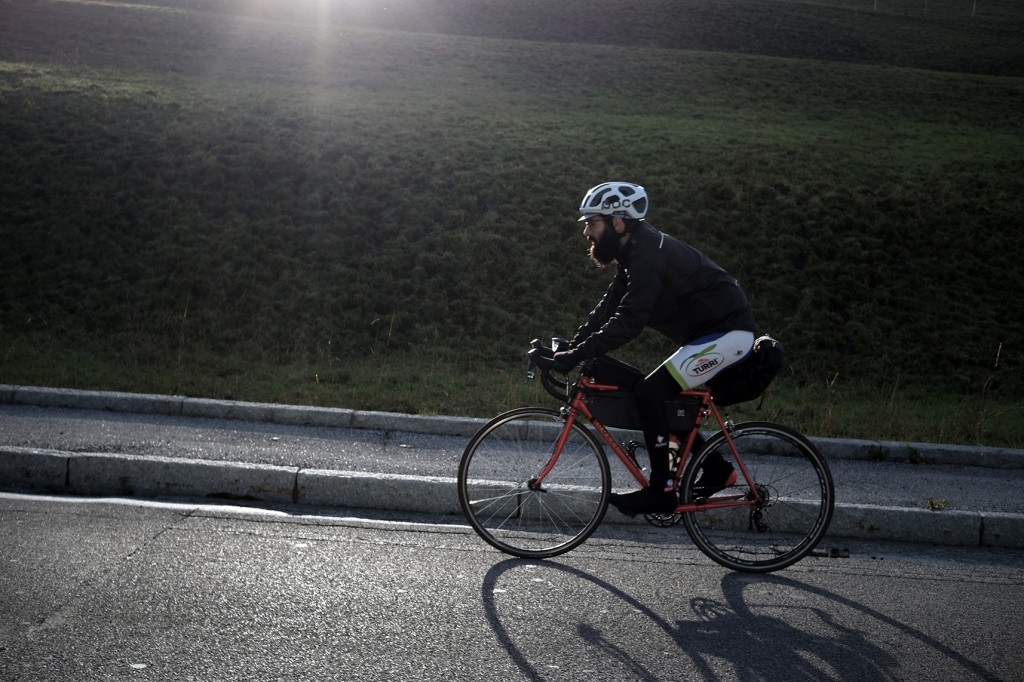 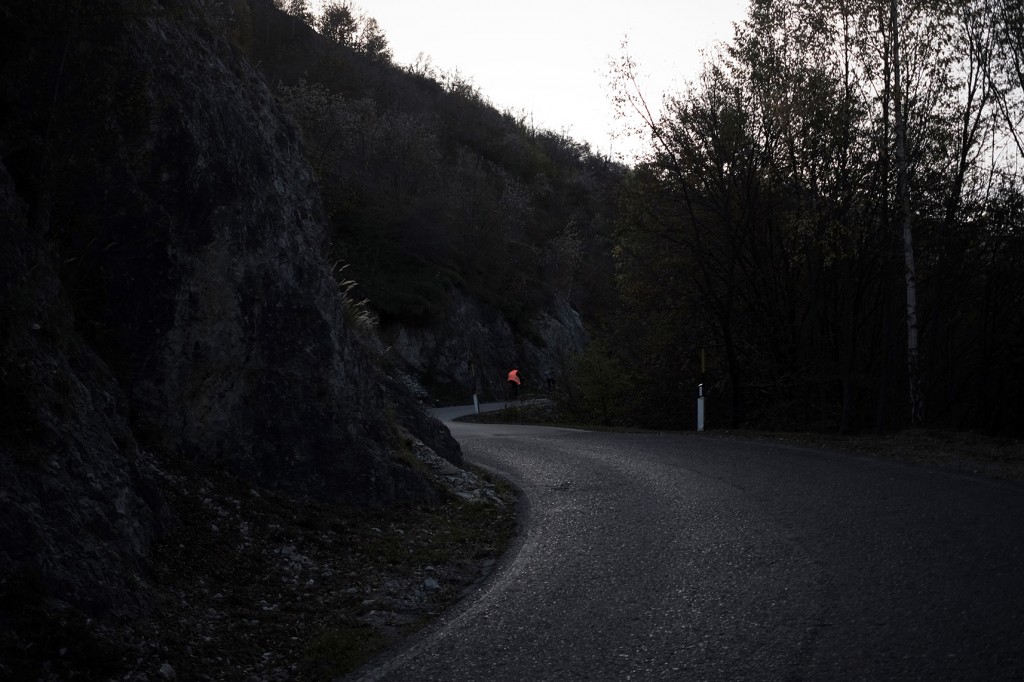 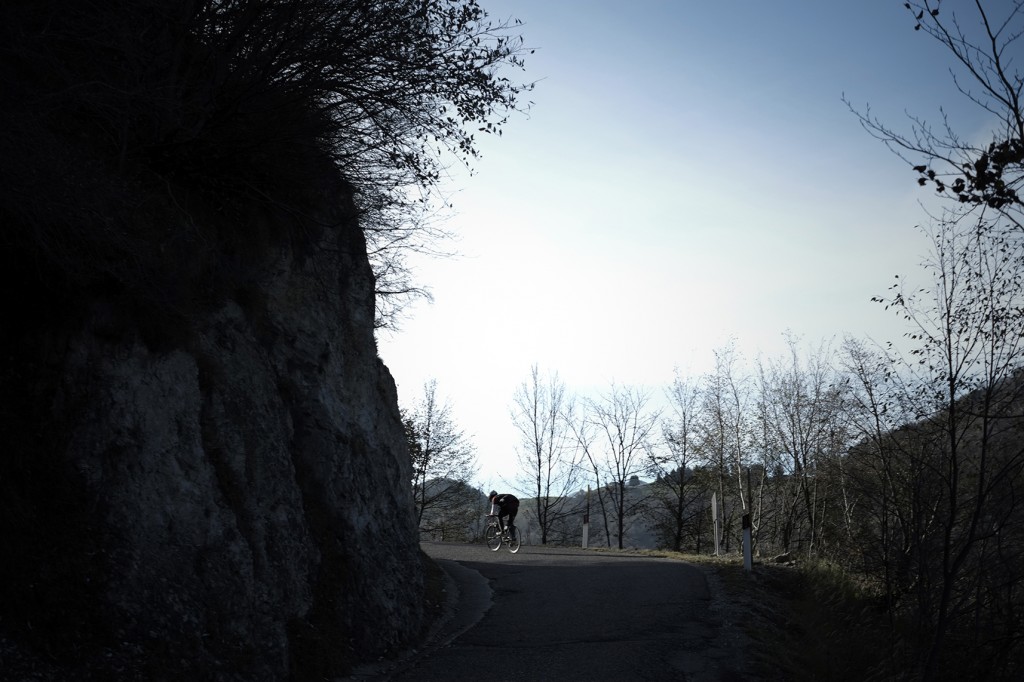 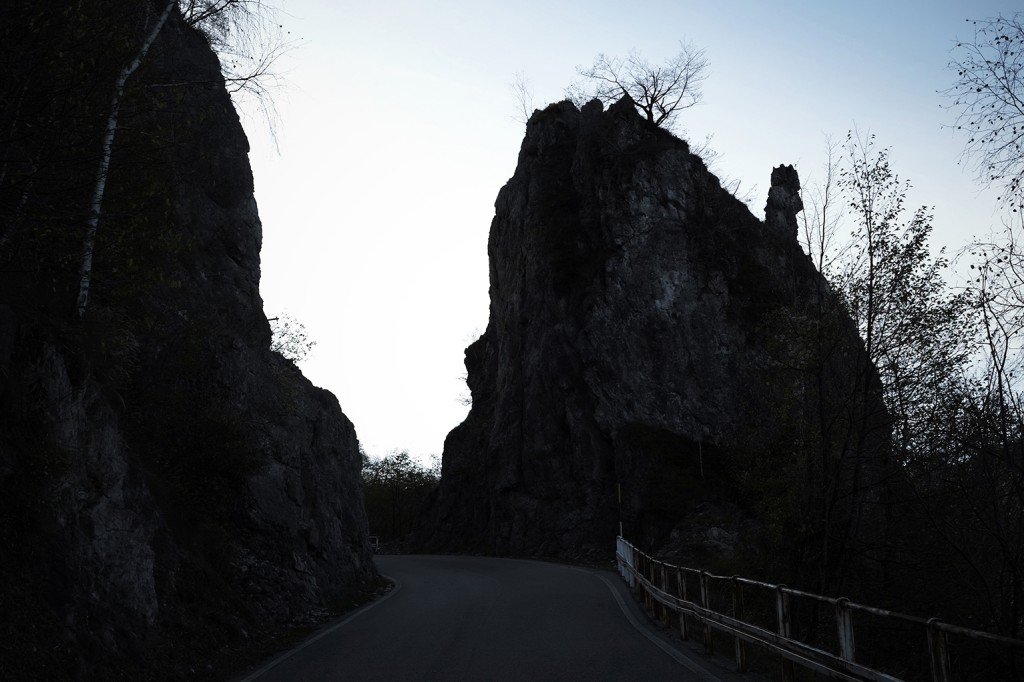 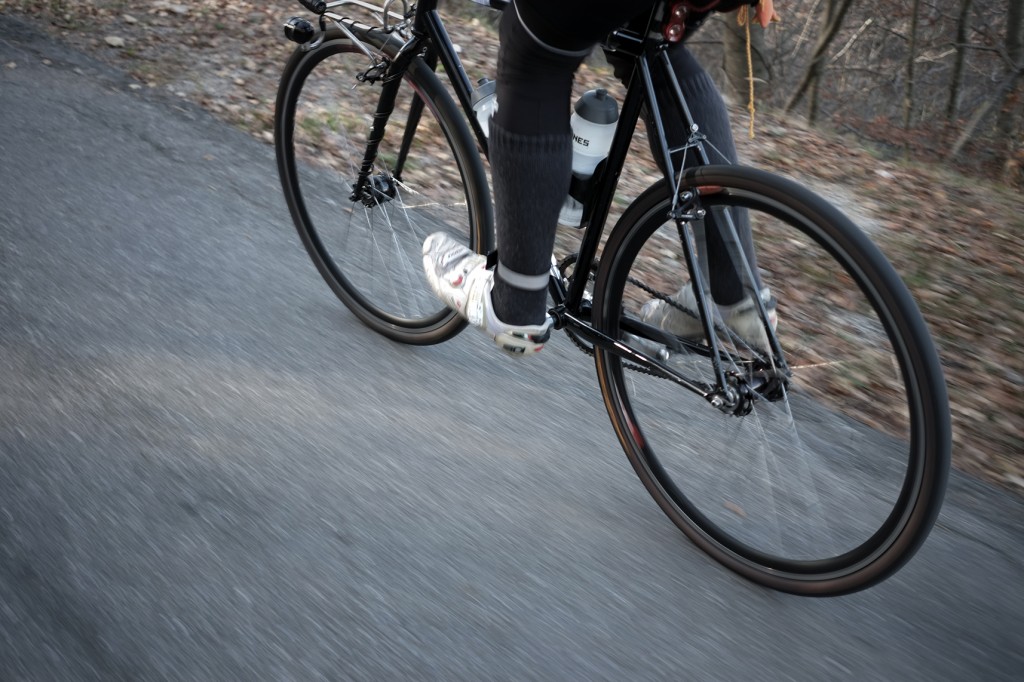 On the summit – Culmine di Monte S. Pietro, 1300 m above sea level – we drink more tea at the cafe. Everything seems going nicely and MPagha promises to show us some secret places on the route with great beers (Hint: we’ll never reach them). 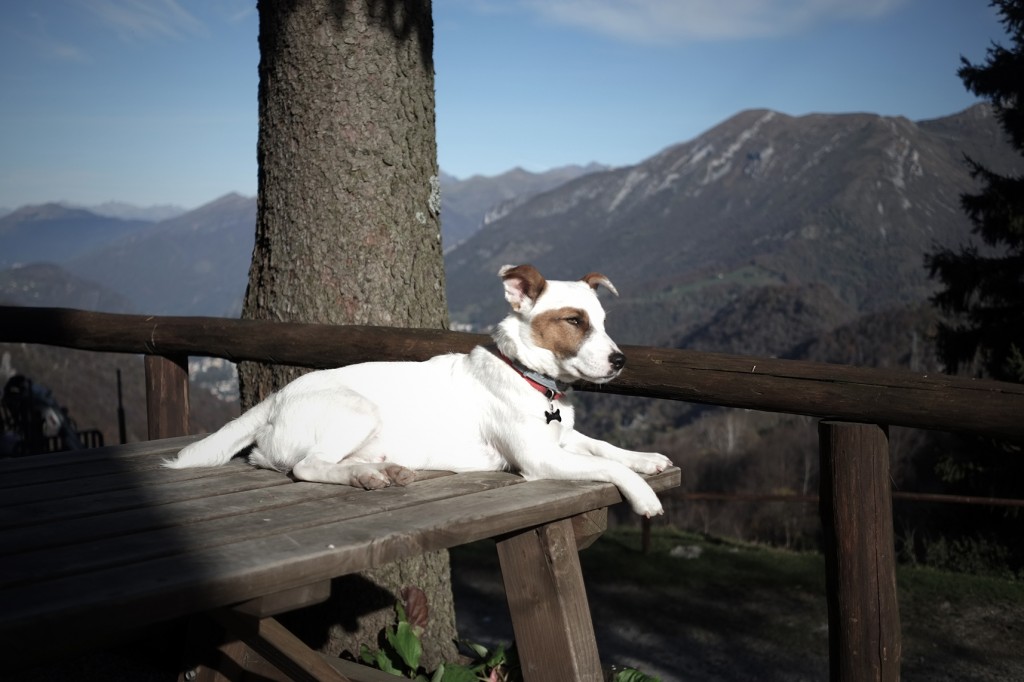 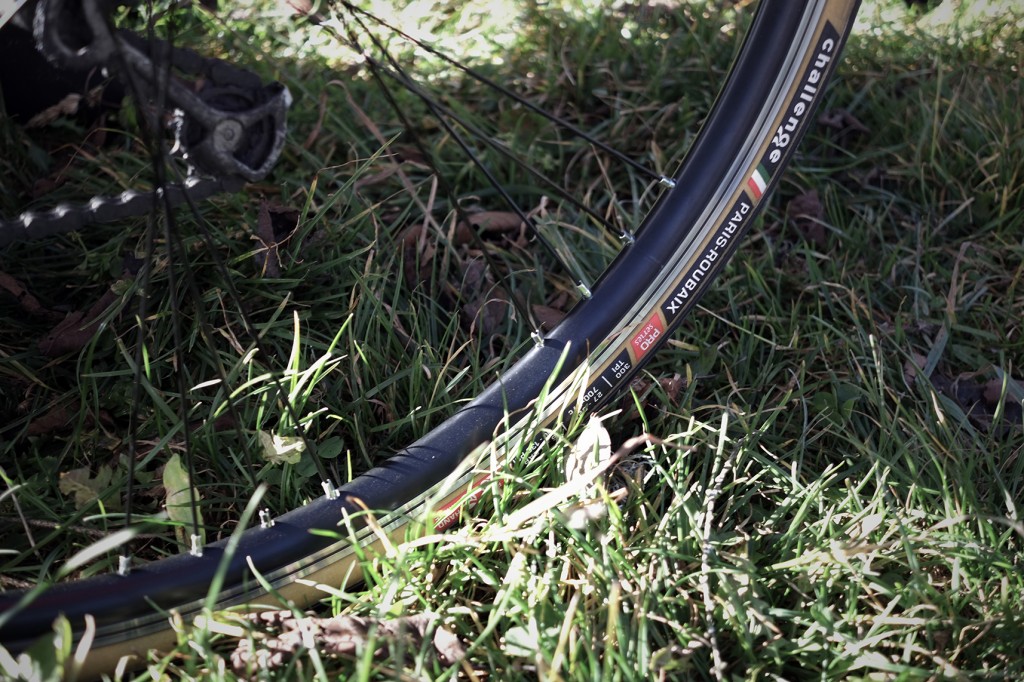 A quick descent on 18% slopes only to climb again (locals were saying that they didn’t expected to climb this part! – everything looked plain on the map!) Anyway, we don’t waste time on this summit and swiftly hit the 14 km switchback descent to the town of Brembilla. 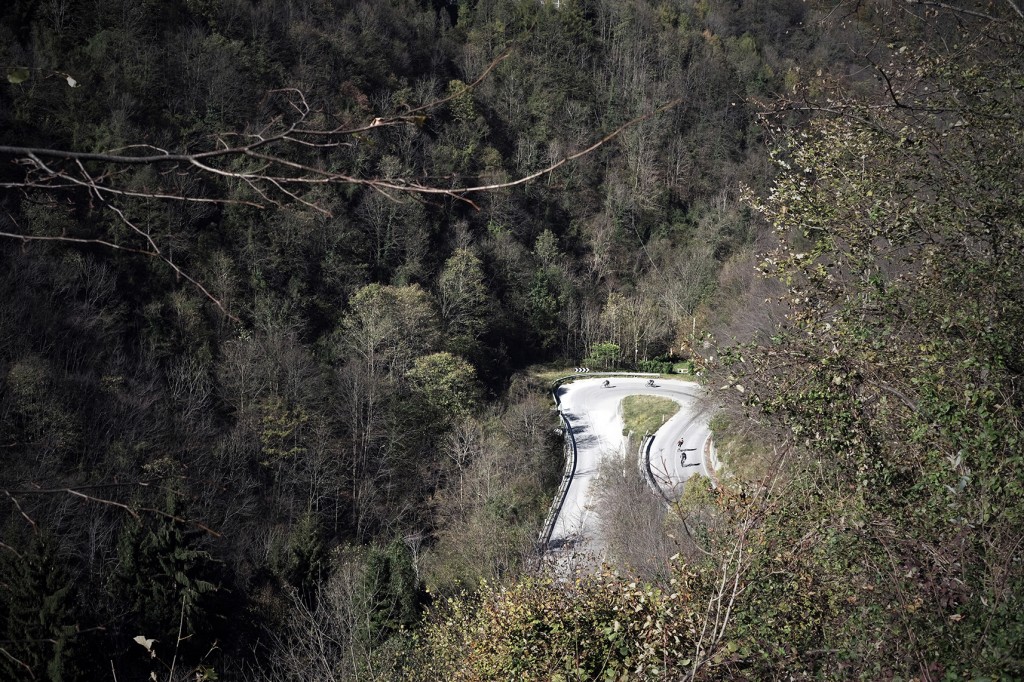 From there we take the road up to Sant’Antonio Abbandonato, the climb who’ll take the heavy toll on us. It’s 7 km with 8.7% average. Here I do suffer & zigzag a lot since I’m on a singlespeed bike (a tiny detail i forgot to mention). The day is at full blow and it’s hot and I’m totally soaked – and superpraised merino jersey from Ra**a doesn’t help at all!  – and when I reach the top everybody’s already finished to banquet at the cafeteria. Another crazy descent (my brakes start to make craaaaazy noises) to the town of Zogno where we look for some lunch options: sandwiches and Polish Coke made our meal. 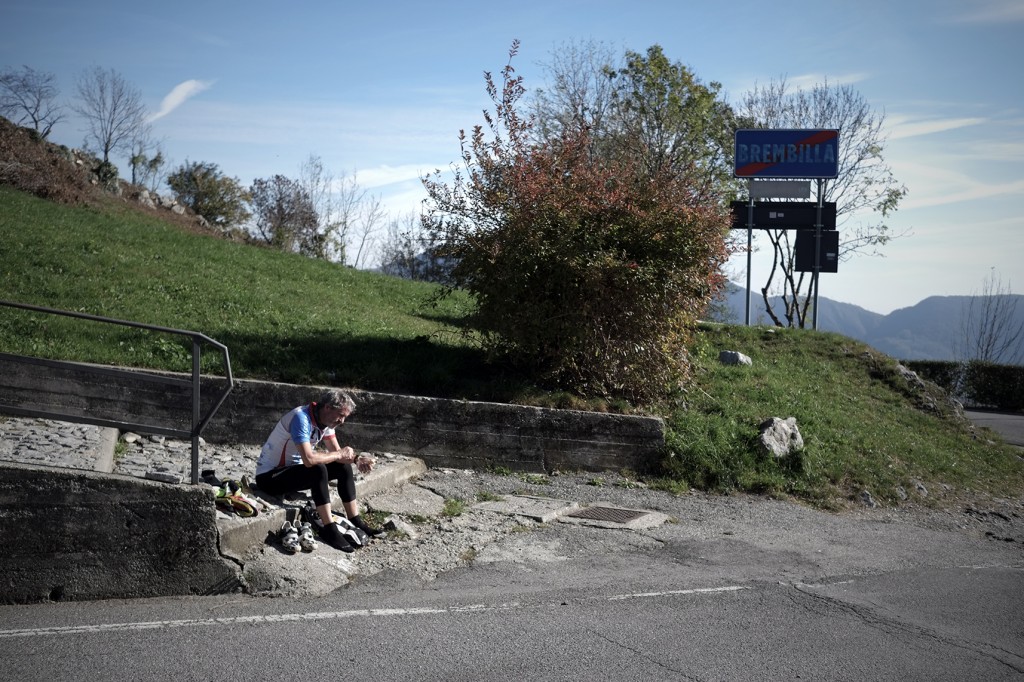 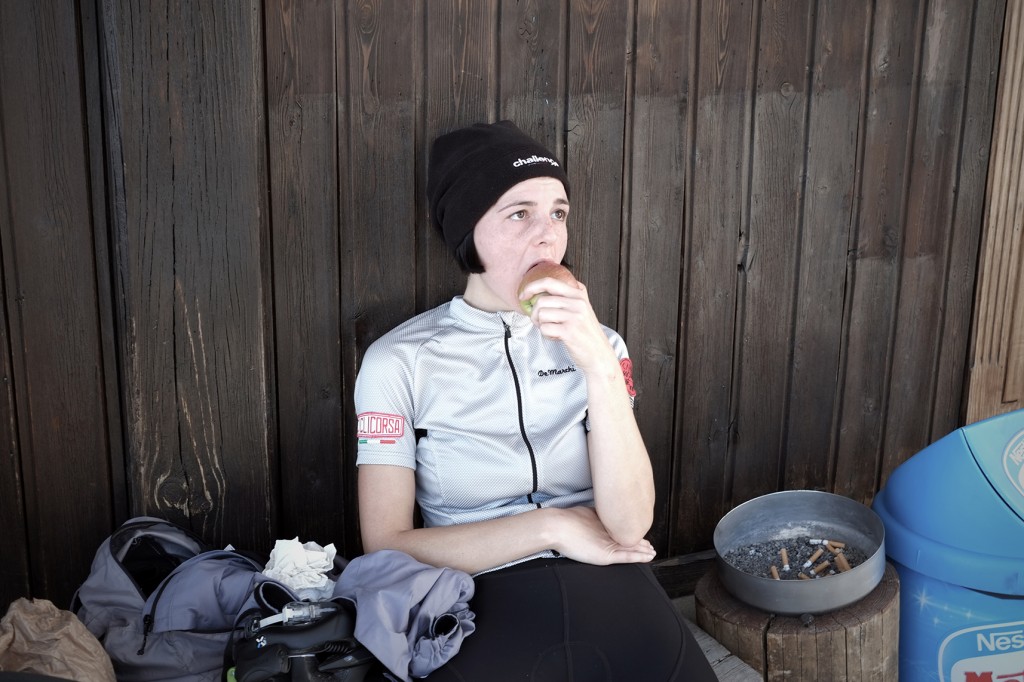 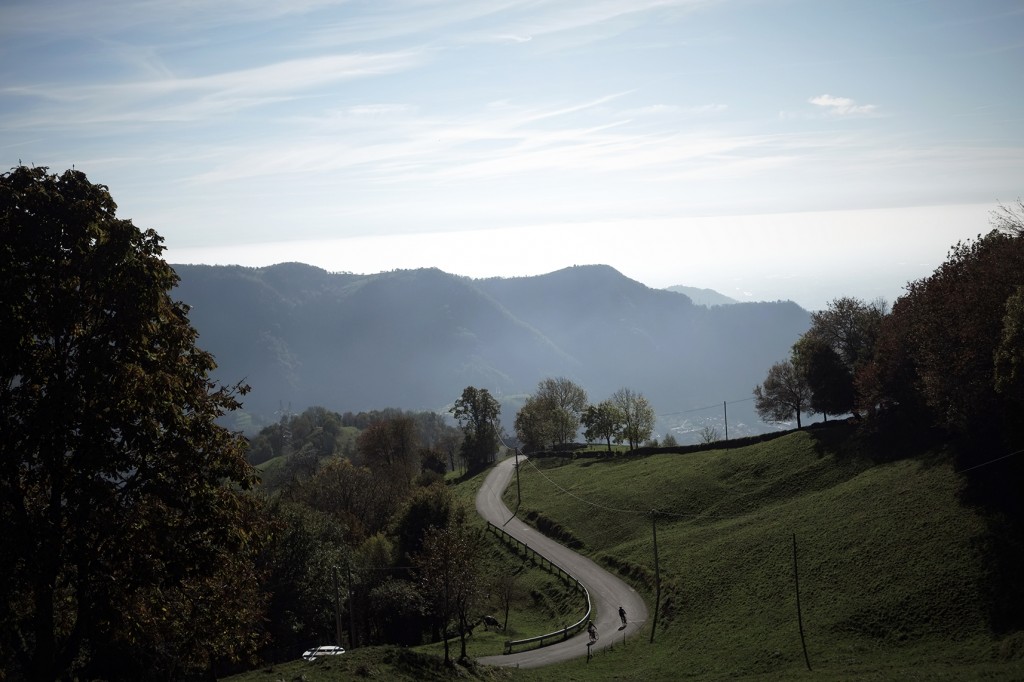 Then it’s time for a narrow valley leading to the Zambla pass and soon we find a closed road in front of us. Here, after some meaningless wandering on the crossroad, everybody takes the indicated detour except Alberto, MPagha and myself. And it’s now that we discover the most epic 2 kilometers of the ride: an empty, sealed mountain road full of debris that brings us to an half destroyed, but still rideable, bridge. We still have this 15 km ascent in front of us and Alberto and MPagha are far ahead (and the rest of the group? God knows where!). I ride these mountain roads completely alone, looking only for road signs telling me about the distance left to the summit, which as usual are not that accurate… The daylight starts to fade and I reach the summit cafe when the twilight begins. There I  discover that I’m only the 3rd and that the group is behind me. This is the proof that singlespeed is better than derailleur! 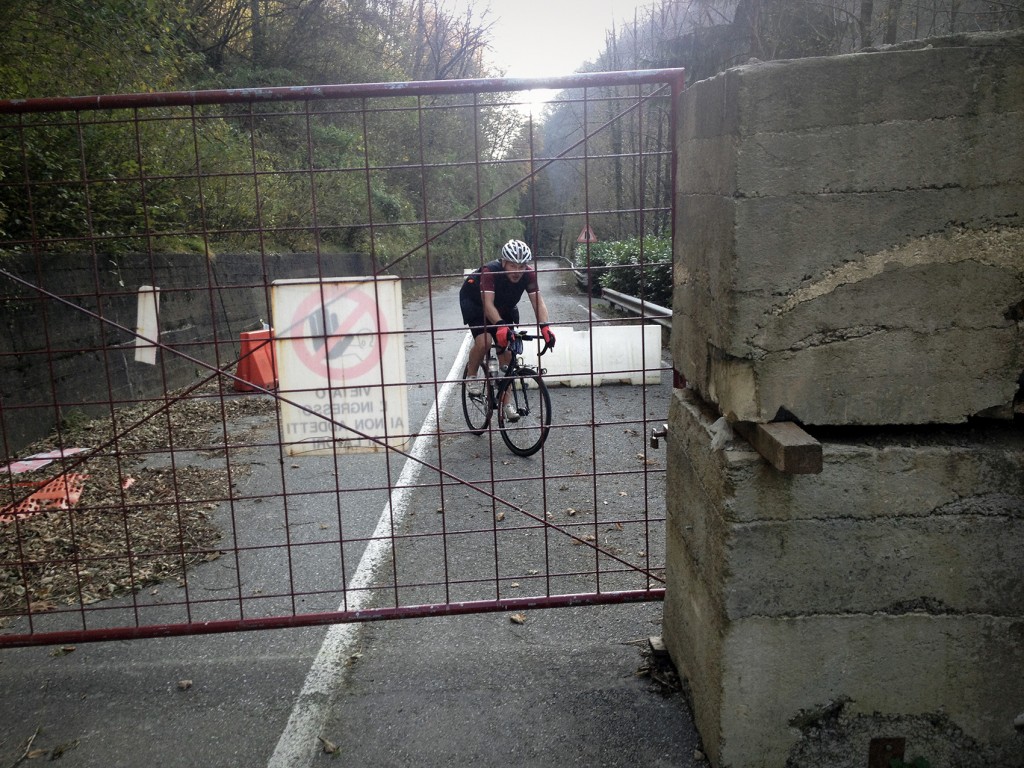 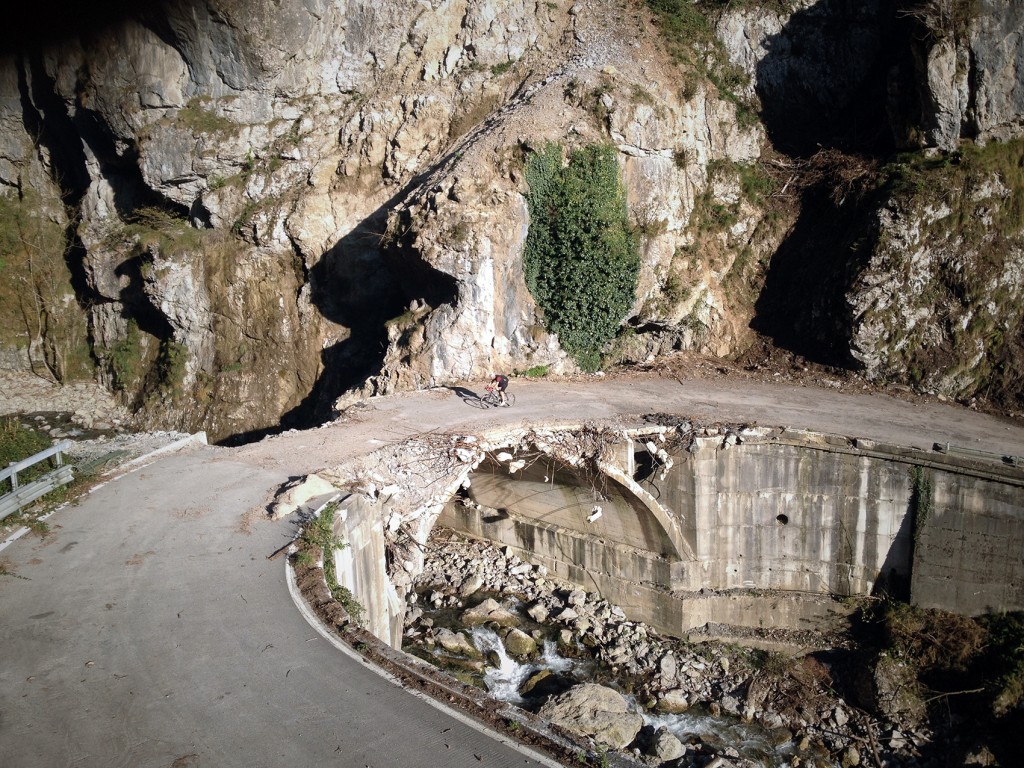 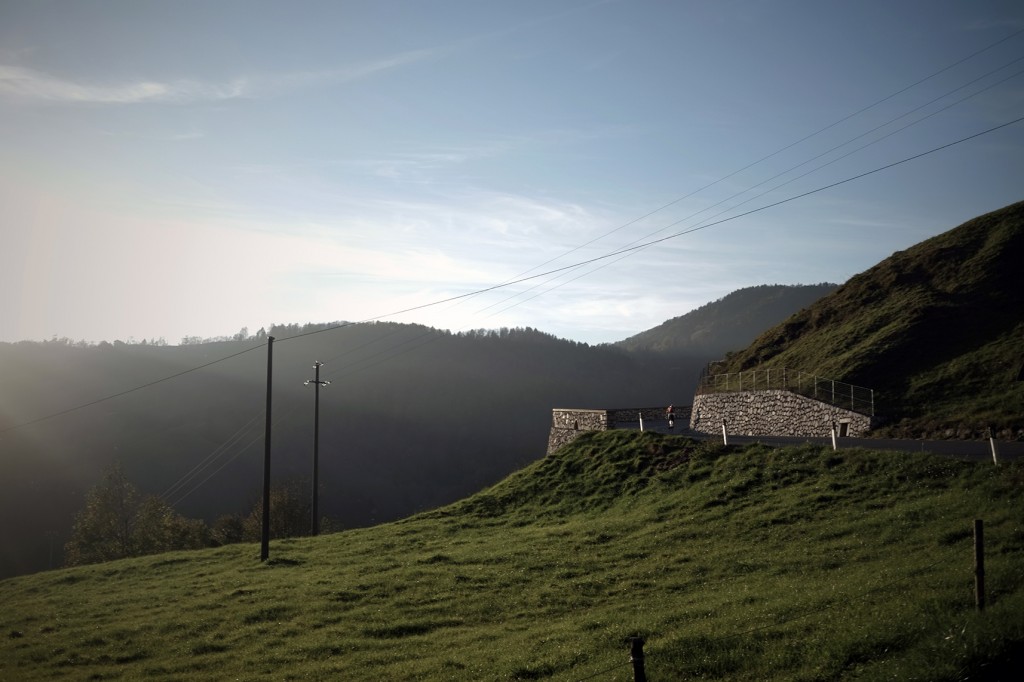 Hot tea again, while waiting for the other guys. The idea that probably we will not continue the planned route appears and grows rather quickly. It’s dark and getting cold and we have 3 passes left to climb before hitting Valtellina again! While every single person in our group reaches the cafe, this strange condition where everybody has strength enough to continue but no motivation was confirmed. That’s when we decide to evacuate from the route and descent towards Bergamo: 30 km of nice gravel path and we’re in pub drinking beer to accept our failure. And a last crazy run to take the train that brings us back to the starting point…. Only MPagha did a full loop on this day. 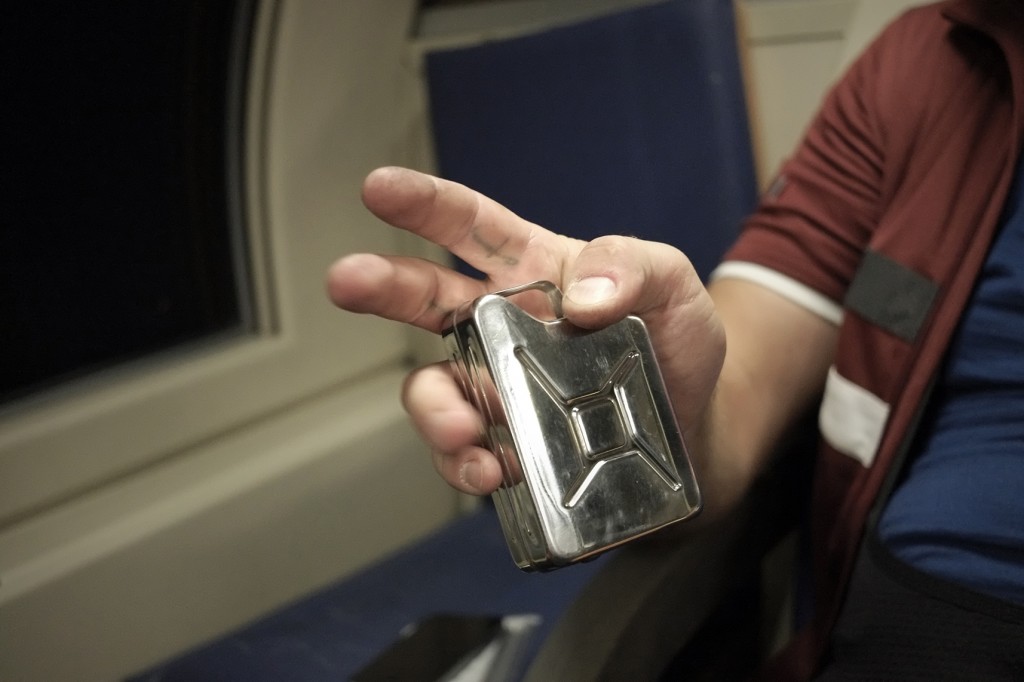 N.B. Cello asked me to elaborate the failure issue.

Somehow I was strangely foreseeing it. Since the late morning I’ve started to have some doubts looking at the time/kilometers progression on my Garmin. We were going too slow, and the climbs were there not to help us. I had just completed super-randonneur series on a singlespeed bike, so this ride was supposed to be a cherry on the cake for me, since it was not timed and I was doing it with my friends. But we were all there with the true spirit of a group ride, not for a pitch black mountains of madness night massacre!