Words by Clava / Pictures by Cello 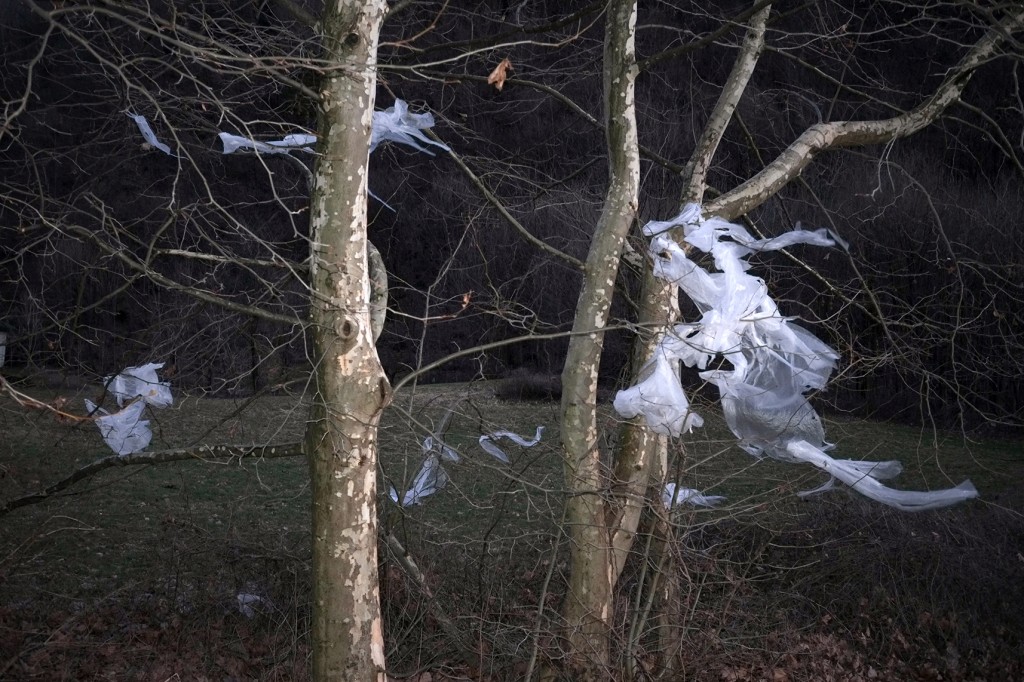 It’s saturday afternoon and I am sprawling on a chair outside my hometown bar, enjoying that sun that in summer I usually reject but now (it’s January 24th) I like so much. On the other side of the bar table sits Farcio – a guy known for his adventures Indiana Jones’ style – I think he is doing the same as I’m… And what would you talk about at the bar if not of the weather?! He starts: “Today is lovely. Sure until now we didn’t feel it’s winter… Also last winter was not so cold… And what an ugly summer, too: rainy and not hot at all…” We are at the bar and to me it seems impolite not giving my opinion about it: “I don’t like dull, imperceptible seasons. It seems that also Mother Nature is softening! I like when the winter is a bastard, forcing you to stay at home near the stove, so that when it’s over you feel relieved. Vice versa, summer must be steaming hot, so that in the evening you must dine on the terrace bare-chested and you think it’s impossible that somewhere winter even exists. So that when autumn comes you’re happy… But no… Lately every time a season ends I feel unfulfilled… It never leaves its mark! This winter without winter it’s really sad! What a drag!

Suddenly a whistle stops my chant. Like: “Ok Clava! I got it, stop it now…! I take my cell phone, it’s a message from Cello: “What are your plans for the weekend?”

“Great, let’s do it tomorrow”.

“Ok, I’ll check if somebody else is going to come with us…”

No one is sitting on the other side of the bar table anymore. I look at the top of the mount Legnone and its majestic shape staring in front of me. Or better: I look at the snow swirls that surround its top, raised by the north wind… 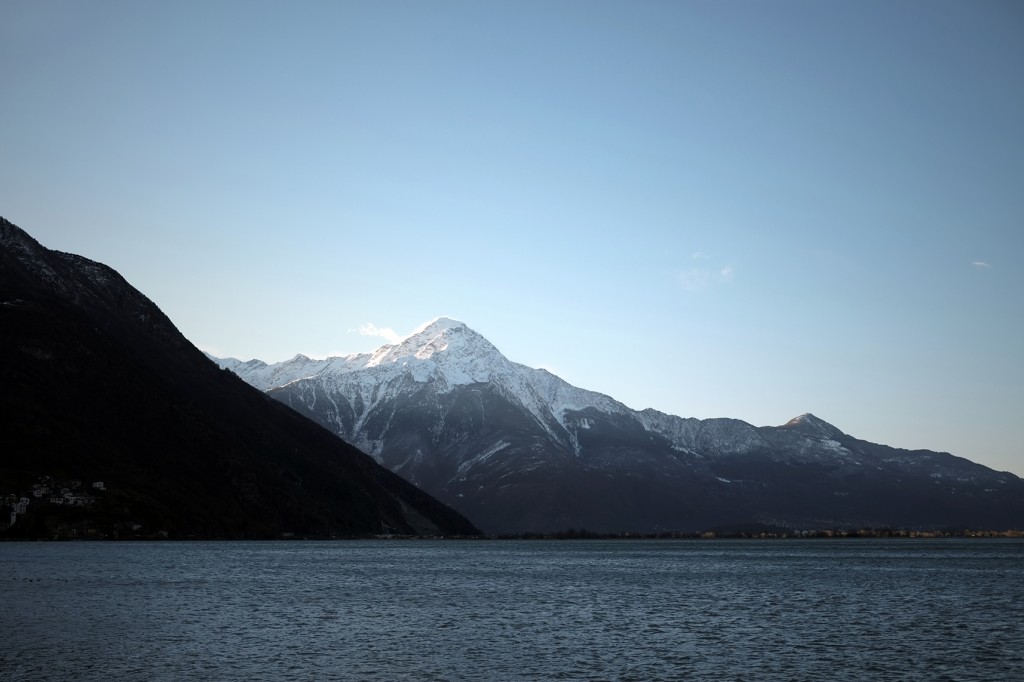 The Maloja is a pass on the Retiche Alps at 1850m asl. Trying to climb it on January 25th should be enough to mend this nostalgia for the real winter. Someone else, on the other hand, has nostalgia for the Bar dei Culi; and it’s there that we will meet the next morning. The Bar dei Culi is located at the door of Valchiavenna and it’s from there that most of our glorious (or disastrous, they’re just points of view) expeditions started. 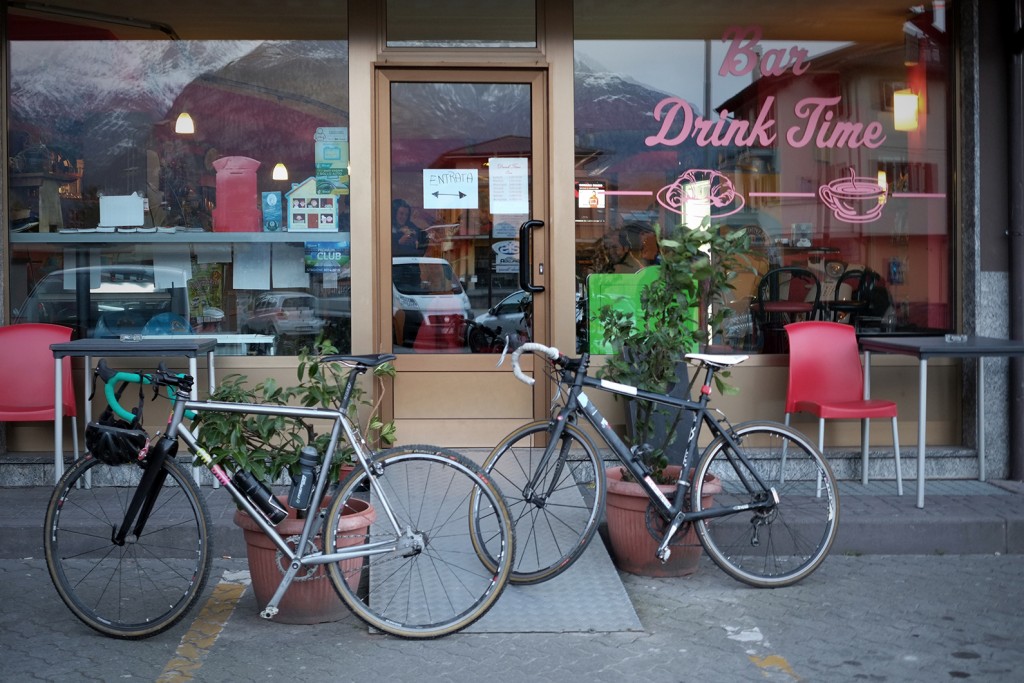 When me and Cello enter, the place il crowded by people leaving for the ski resorts. We’re dressed in dark clothes but we’re like white flies. I am accustomed to have all those perplexed eyes on me. We sit and have breakfast waiting for Alberto. While a group of boys, probably still around from saturday evening, look at us sneering, I check the trees bending outside of the window, as if they’re asking me for help and want to escape from that crack dug between two hostile rock faces called Valchiavenna. I take a sip from my cup to rinse my uvula and prepare it for the swearing: I understand that in a while I’ll have to say a lot… It’s Murphy’s law: you’re worried about one thing and for sure that will not be the one that will give you troubles, another one will take its place. My backpack is fully loaded with winter clothes and it’s 5°C but I haven’t considered that in Valchiavenna when the winter blows it blows in a manner that… Forget it…

When Alberto arrives, we leave. I don’t say nothing but everybody knows that we will suffer. We ride along the small Novate lake. The size of its waves remind me of those of the sea in summertime, but these are grey and nervous. I’ve never seen it like today! Considering the lake’s moderate size. 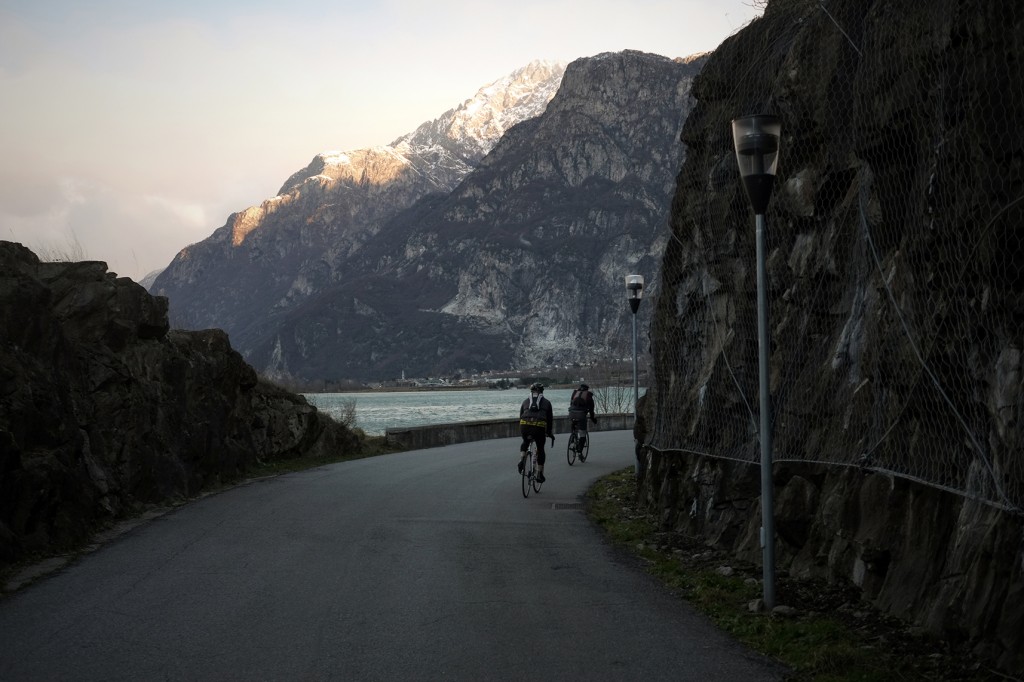 Now the rock faces are at my side. At this point, the wind (or maybe the mountain, or maybe the valley, or maybe the fury of the gods or god knows what!) begins to wail, uuuuuuuuuuhhh… As if in place of the two faces there were galleries crowded with rival supporters, uuuuuuuuhhh… 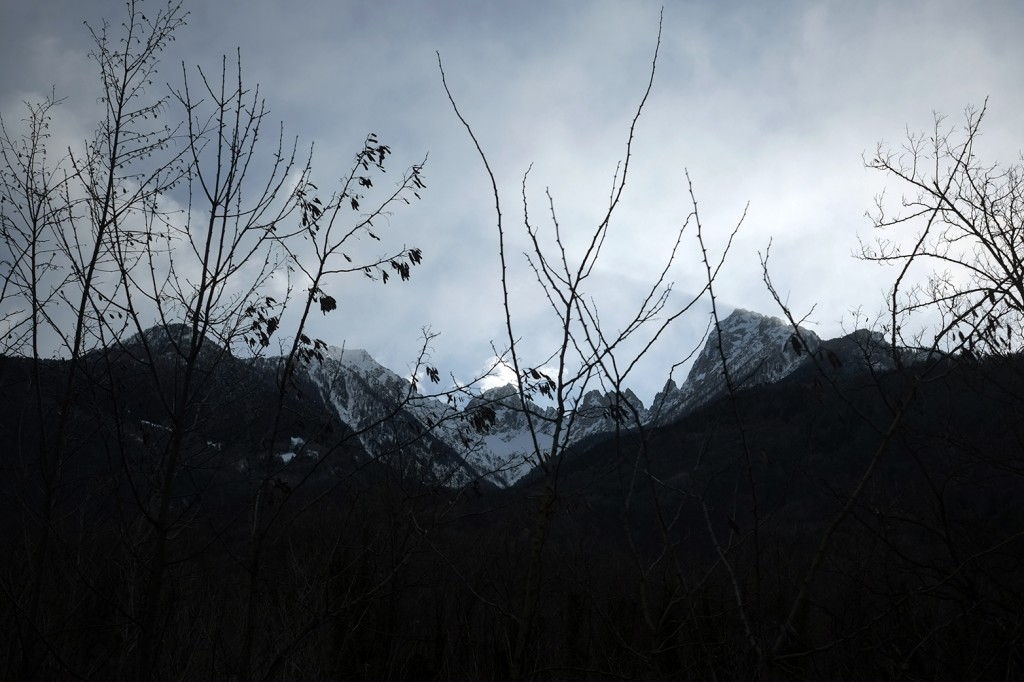 Alb, acting like nothing’s happening, is having fun bunny-hopping the branches torn and spread on the road by the wind. Cello, in Lone Wolf gear (that is with a cyclocross single-speed bike with knobby tires) explains his choice by telling that on his road bike he cannot mount tires larger then 23c, not enough to face today’s trip. But I don’t believe him: I know he wants to emulate our friend Alexei, aka Lone Wolf. I bet next time he will show up with a front rack, too…

When the road turns right and proceeds for 50m obliquely, the wind tries to send me on the grass fields for a tour. “Better have it in the face where it stops you but doesn’t tumble you down!” – I think while I proceed inclined like a frame on a easel. Meanwhile, all around the howls continue. They buzz in my ears and I notice that they are bringing me a message: “Who did you name Wimp, yesterday?… Uh!?…” – “But no, come on… You know… At the bar we always speak bullshit, but please don’t take them as true… And moreover, you don’t have to prove nothing to anyone…”

We get to Chiavenna, where the climb starts. We rode the first 30km on flat. They should have been a warm up but I feel as I’ve already reached one goal. We cross the city without stopping and near the Swiss customs the wind diminishes: except for a few gust now we can pedal more easily. When we are in Bondo, I look at my right and I see the North-East face of the Pizzo Badile: a real smooth, curved, sharp blade piercing the sky to turn it upside down like a clod. I think at Hermann Buhl who, in 1952, after climbing it in solo, got back on the bicycle with which he came, to come back home to Innsbruck (before his wife got home from her relatives) doing the same road that I will ride today, until the pass and over. What is for me a challenge was for him just the “return to home”… Meanwhile the sky gets white and a few tiny flakes, I don’t know if blown by the wind or not, sting my face. 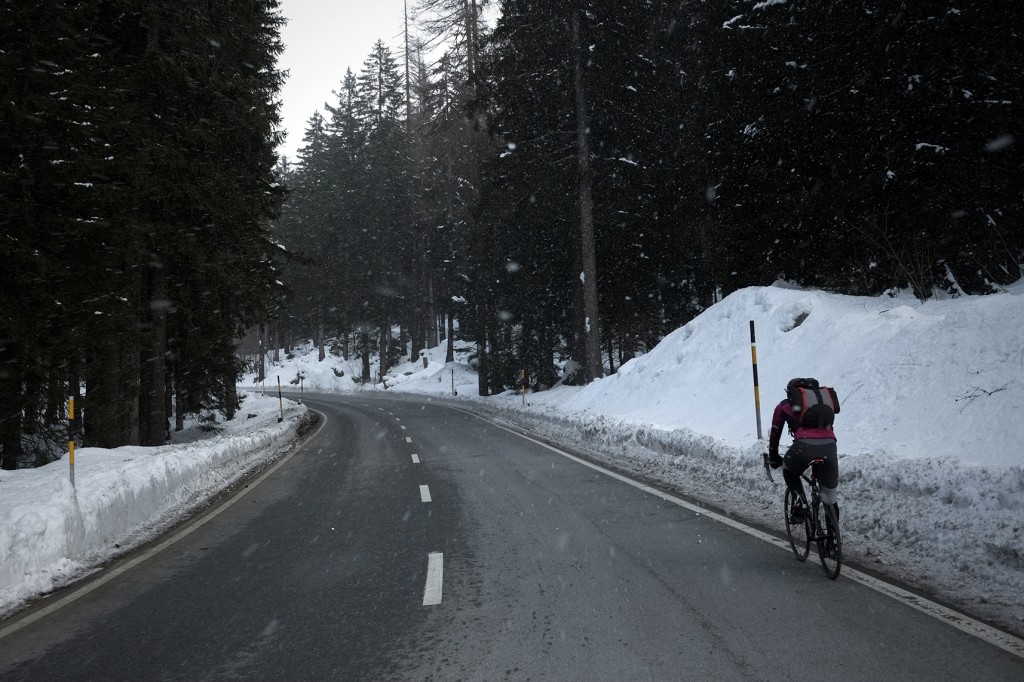 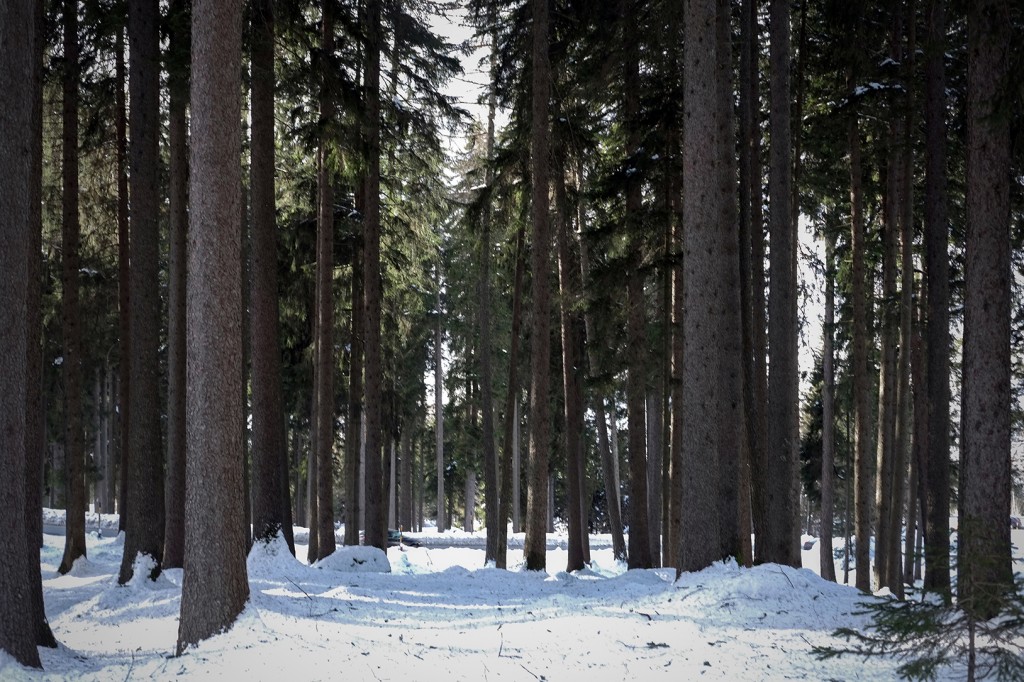 The road climbs but it’s still clean. When I exit a larches forest, on a flat road leading to Casaccia, the snow is falling intensely and grips the asphalt. The wind is strong again and due to the height and the cold it cuts my face. I find myself immersed in a small snowstorm without datums, everywhere is white, except for some car coming out from the void. I stop and put my blinking lights on. 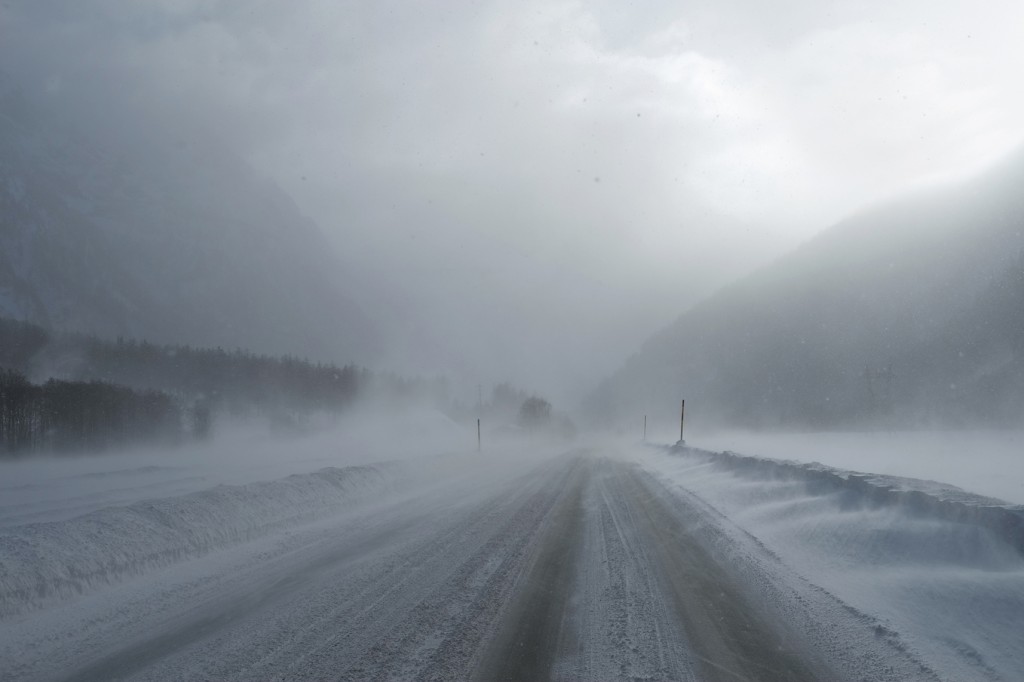 When I arrive in Casaccia I see Cello and Alberto’s bikes leaning against the post office building. They have found shelter inside a telephone boot annexed to the building. I take shelter, too. We get ready for the final assault but we have a doubt: if the road on the last wall to the pass is in the same conditions as it is now, how will we descend (supposing that we can climb it, first)? The ghost of the Randonnée delle Orobie appears. Another idea of mine not accomplished… Anyway we must try; we eat something but not too much because digestion could steal energies useful for the climb (ehmmm… as Walter Bonatti teaches) and after getting more dressed up, we leave.

We immediately go to the bottom of the matter because right after Casaccia there is a 12% ramp. I didn’t believe that one day I would have been happy to climb such a ramp with a backpack on my shoulder! The fact that I can do it means that the road is clear! We can go on! The wind which created the snowstorm came from a small lateral valley. I know this road. After the ramp there is a flat section and then there it is: the last wall to the Maloja pass! Like any other wall, it divides. It separates the waters: here, they run towards the Po and the Adriatic Sea; there, they run into the river Inn, the Danube and finally the Black Sea. At its top the Higher Engadin starts (or ends). 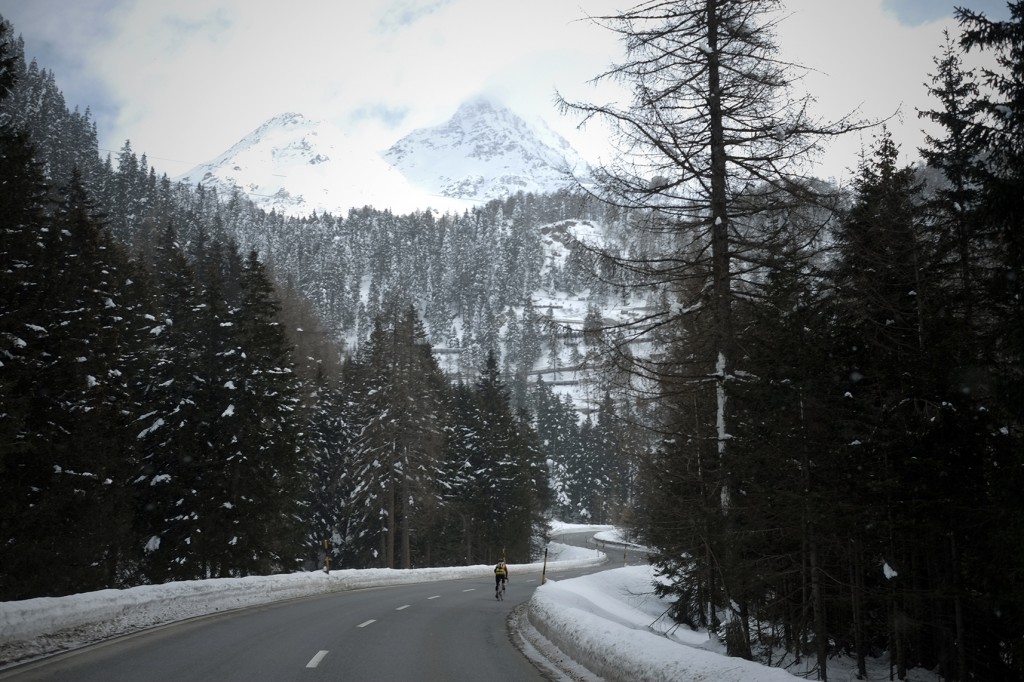 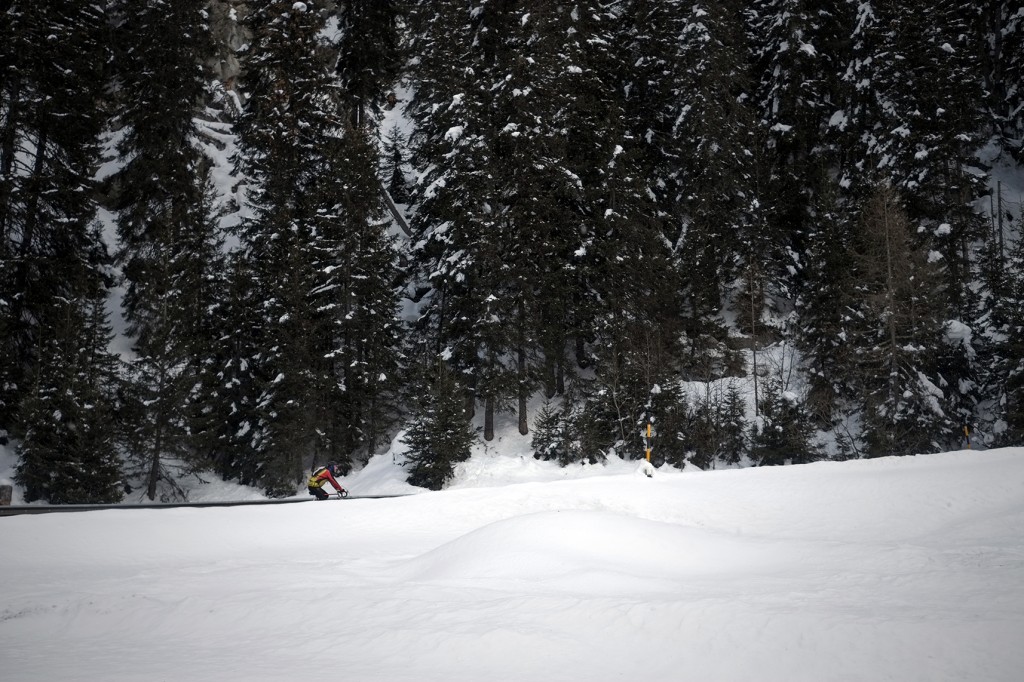 Now I’m climbing on the road like a bug on a table’s leg. I hope to find not only the crumbs, there on the top… I know every hairpin but I don’t know what’s happening today: my legs don’t spin. It has been 60km that I’m fighting against wind with a fully loaded backpack, so it’s not the case to crack down on myself… Because also this time I make it to the top! Done! I reach my pals. 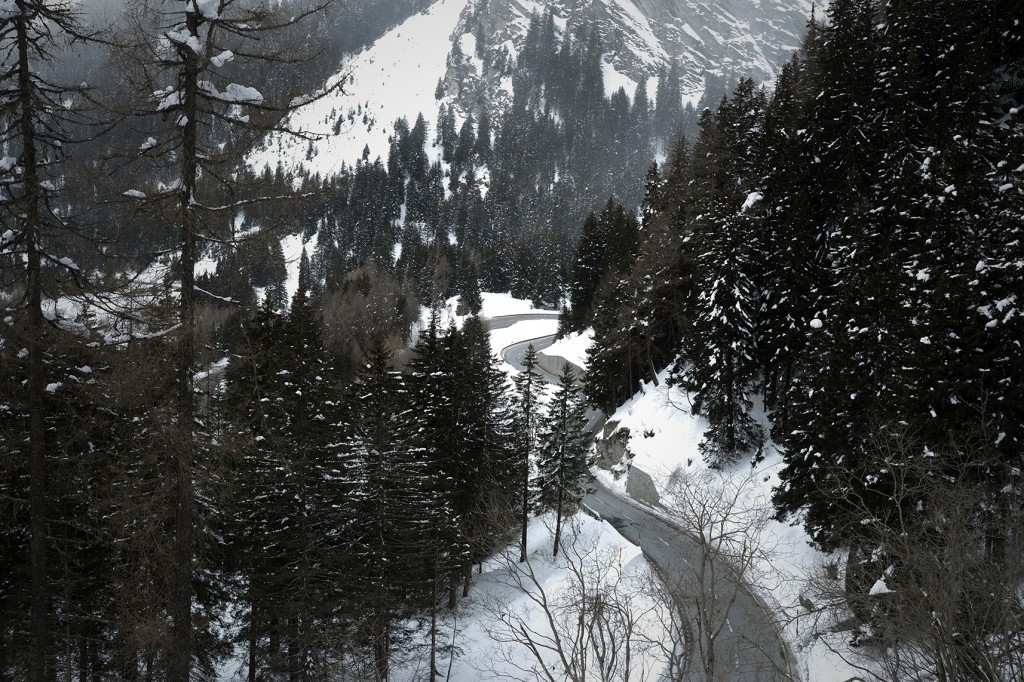 It’s really cold up here (-15°C) so we look for a warm place before facing the descent. But we forget that we are not in Italy but in a foreign land where it seems it’s not common going to the bar: we can not find any! We finally go into an hotel/restaurant where we get some tea and cake, but we pay for them as for a full dinner in any italian restaurant! The walls are at least one meter wide but it seems winter entered this place, anyway… It’s time to leave!

I’m ready, I get out and I take a look down the wall. There, the snowstorm rages. It’s not in a hurry, it is waiting for us. “Bye Herman! I’m going back. Don’t let your wife wait for you too long. Don’t stop swimming in the Inn ‘cause the water is cold these days…” 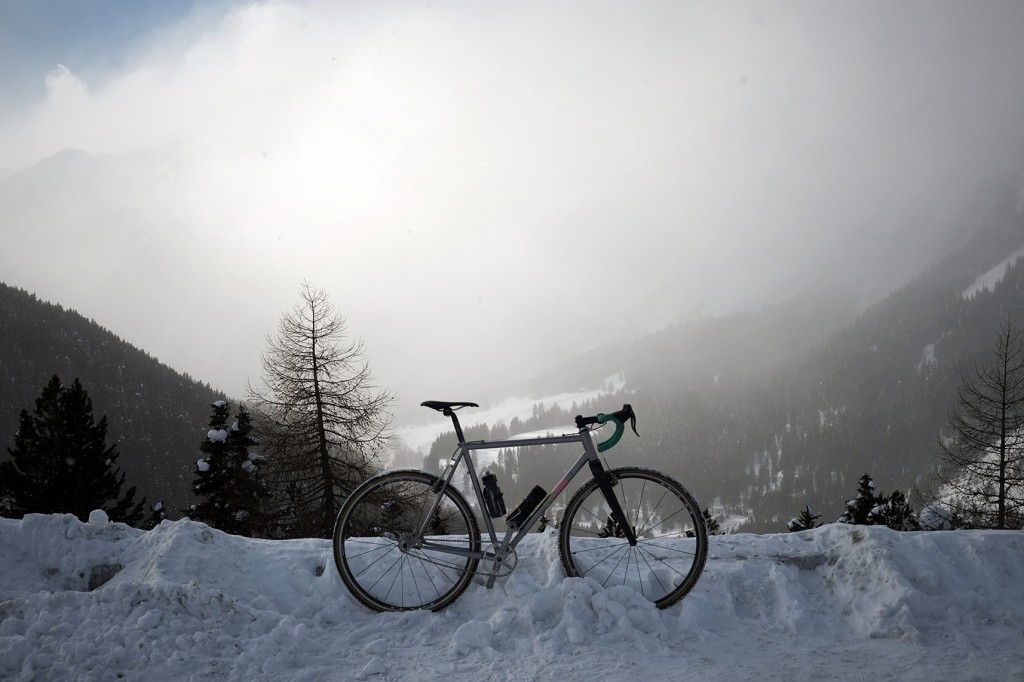 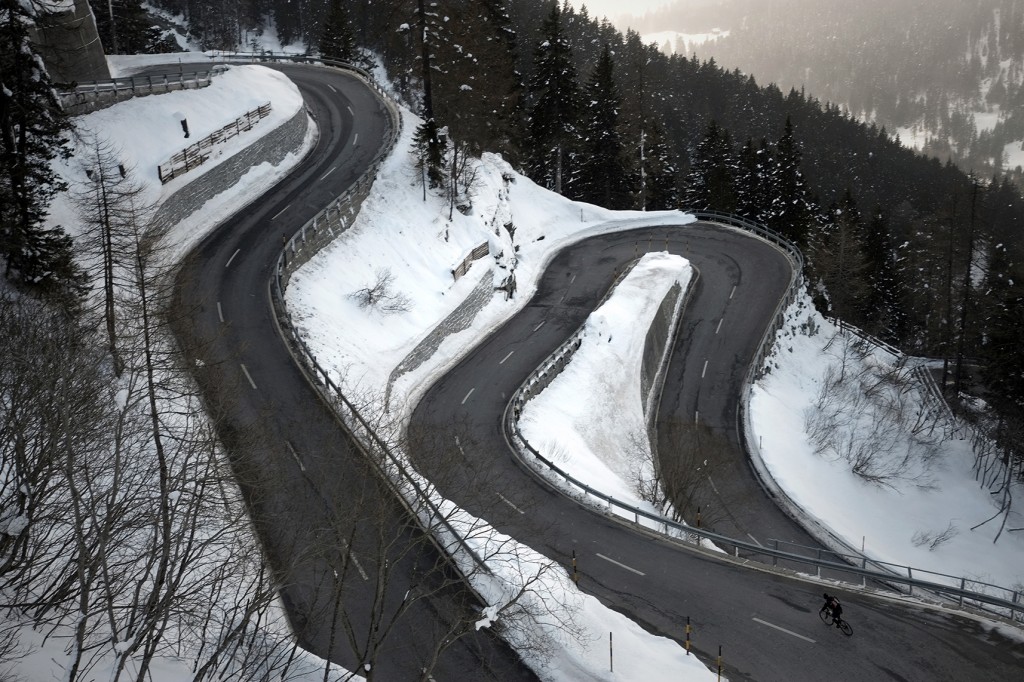 And then the tape is quickly rewinded: one pedal stroke, the descent, the freezing hands, the whiteout, turn on your lights and be careful with brakes, then the larches and the snow that stings, then I say goodbye to the Pizzo Badile which continues its job, I say goodbye to the Castelmur, I say goodbye to the zucchini at the customs (“You thought you will not see any Terrone until spring, but we are still around to break your balls!”). And then Italy, the land of sun, but the sun doesn’t shine… 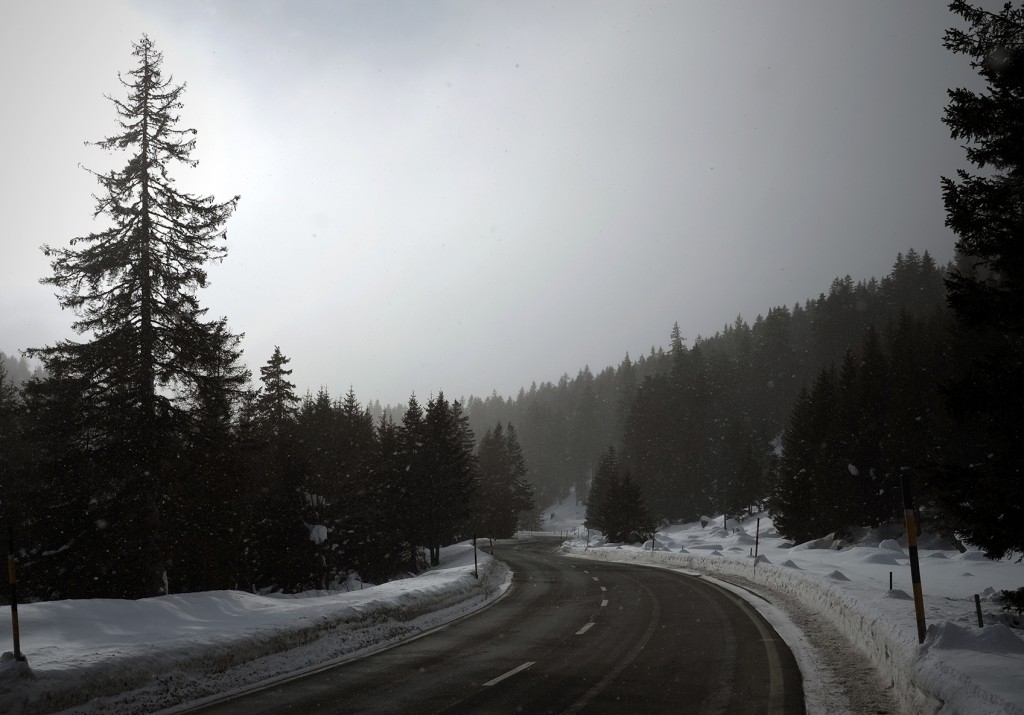 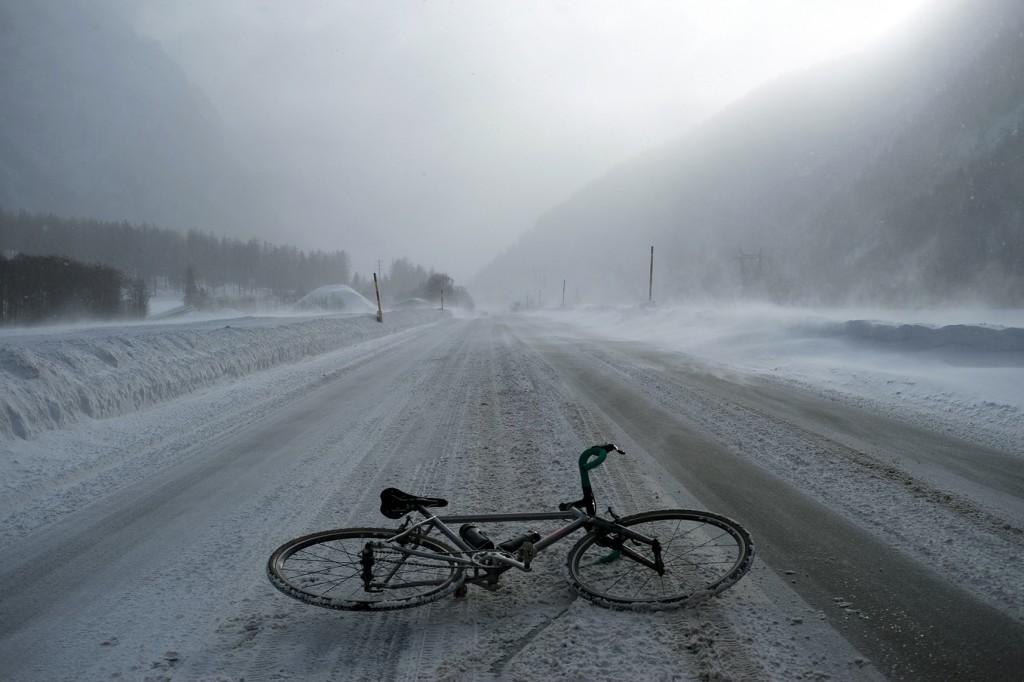 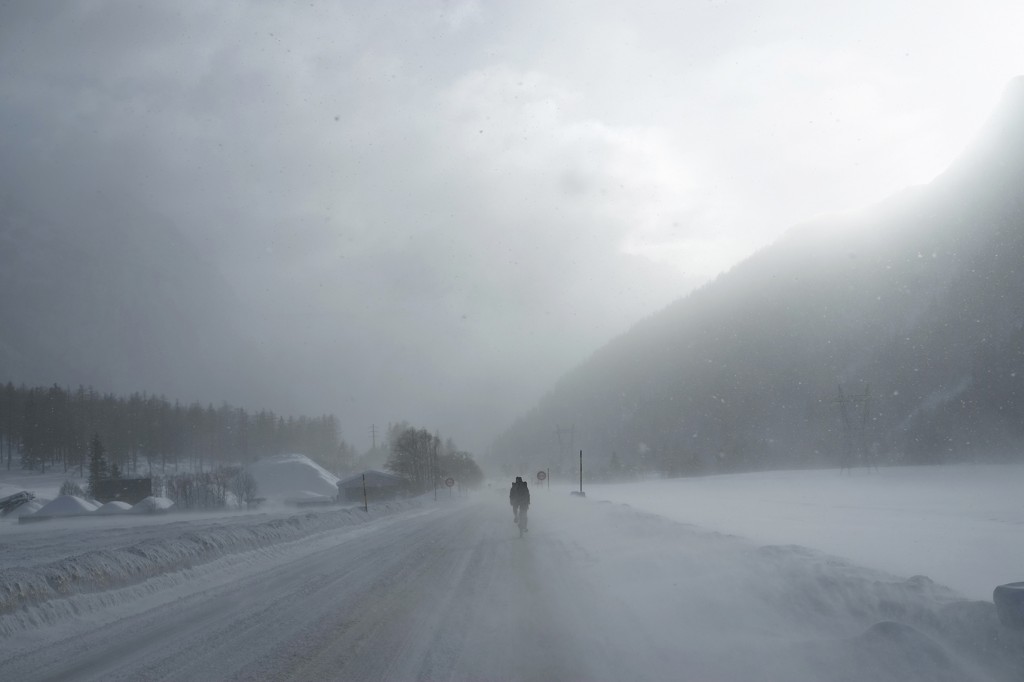 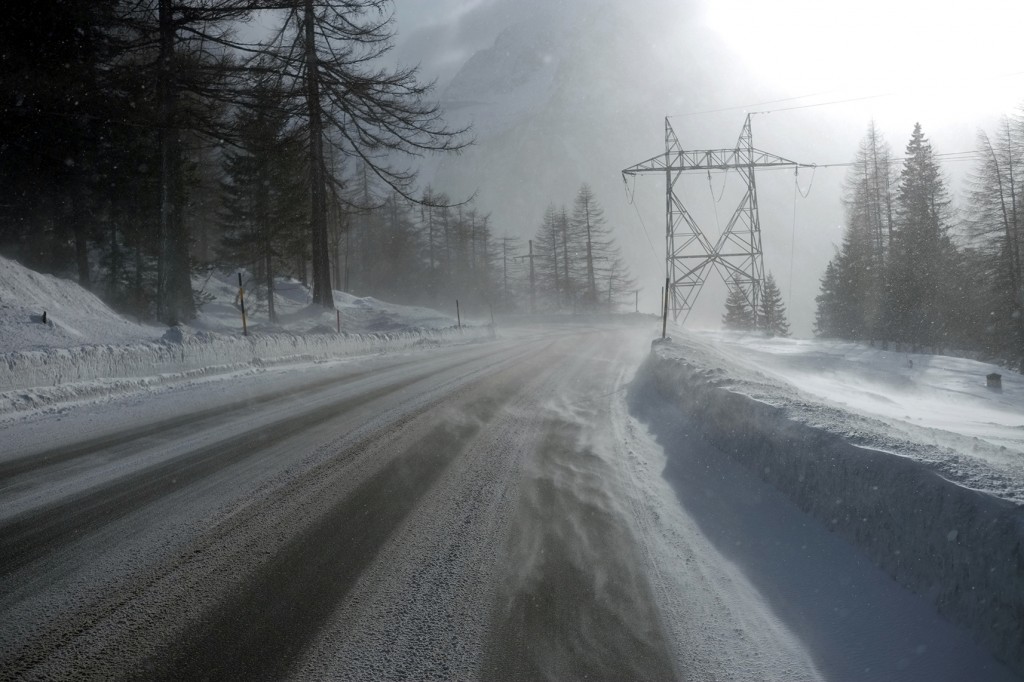 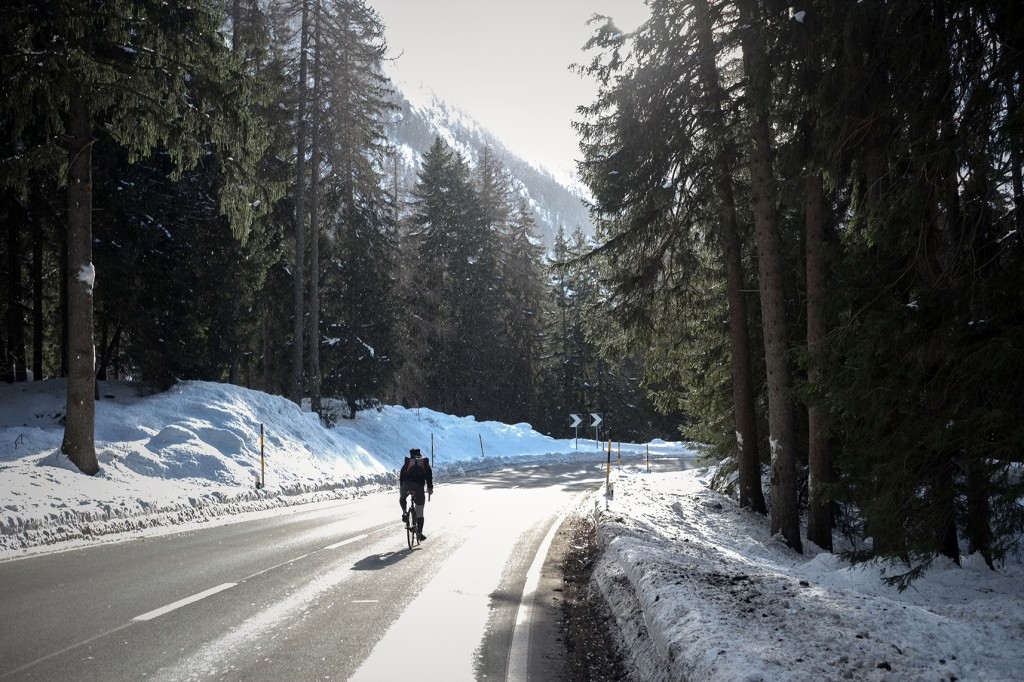 We arrive in Chiavenna and while we are waiting at a red light, Cello’s tire explodes. It’s one of those things science hasn’t found any reason, yet, like stigmata. Cello’s tires get flat also when the bike is not moving. At night when it is hanging in the garage or when it is traveling on the car roof racks… The only thing he can do is to keep the faith… While we’re fixing it, a scary thought is running in our minds: “What if it happened up there in the middle of the snowstorm?” Well, it didn’t, so we laugh at it…

We leave. Now a tail wind, weaker than this morning, is pushing us and we exit Valchiavenna as we are vacuum-sealed. 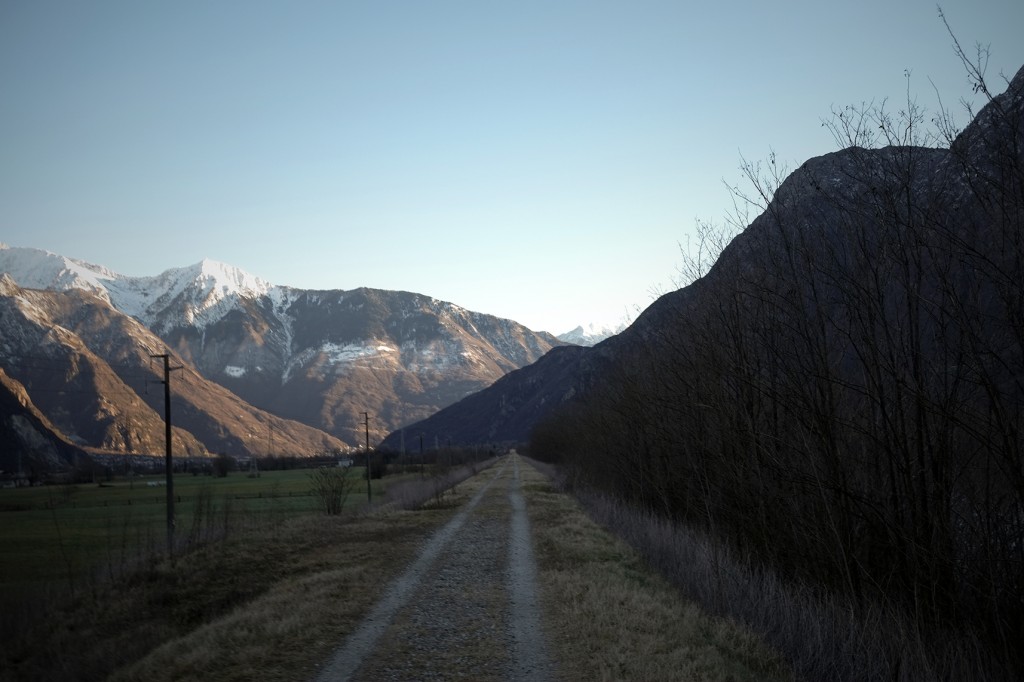 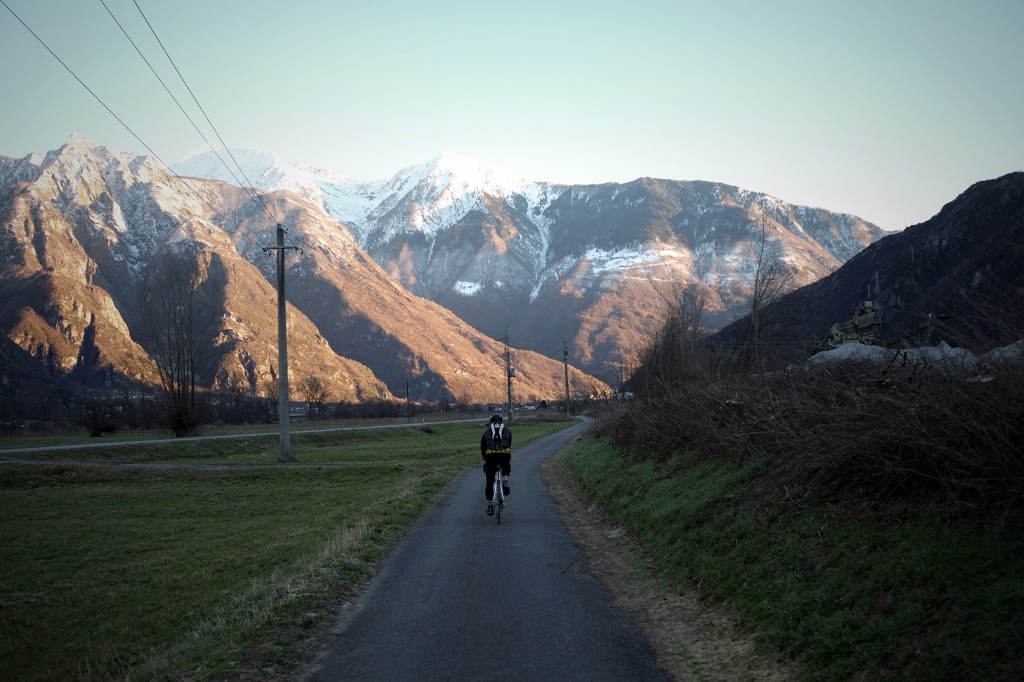 At the Bar dei Culi people are having cocktails. Today is Sunday! So tonight pizza?